Five people have been arrested on suspicion of causing the market fire that killed 16 people, including a baby girl, in Shenzhen last week, Sina English reports.

The fire broke out at Rongjian Farmer’s Market in Guangming New District in the small hours of Dec. 11. The flames engulfed an area of 1,290 square meters and took two hours to be contained.

An investigation showed that a short circuit on the power cord of an air cooler at a refrigerating chamber caused the fire, which also injured 5, according to the provincial administration of work safety.

Stalls that had been set up illegally, a lack of fire prevention measures, and poor fire safety supervision were also blamed, according to the investigation.

This has not been a good week in the PRD, as a fire also destroyed a high-rise building in Guangzhou.

Around 7,500 kilograms of dead fish have shown up in the lake in Minghu Park in Shenzhen’s Guangming New Zone, Yangcheng Evening News reported yesterday. The fish are thought to have been killed by the large amount of industrial waste and domestic sewage from the surrounding area that gets dumped into the lake. The dead fish have been accumulating since October 20 and the problem has been exacerbated by a shortage of rain in recent weeks. The dead fish have attracted a lot of vermin and the nauseating stench has driven tourists away.

An investigation has revealed that a nearby plastic factory has been dumping waste water into the west part of the lake. 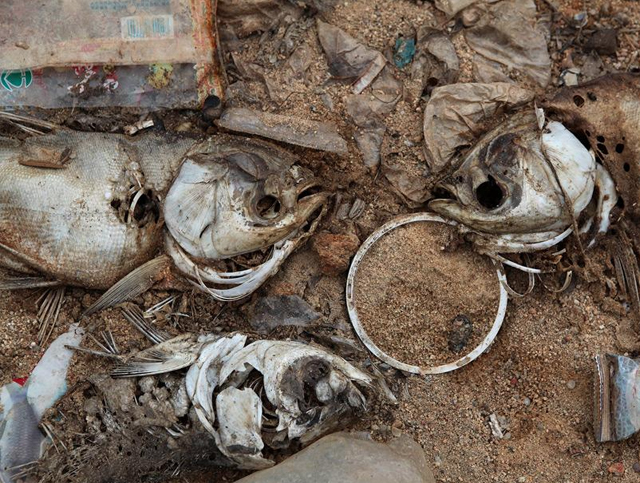 The Economist published a report last month on how water pollution was one of the most urgent, and seemingly intractable, environmental issues facing China.

It was revealed in September that an extensive clean-up of Shenzhen’s Maozhou River, scheduled to be finished in 2015, would cost nearly 2 billion RMB. Doubts remain as to whether it will be effective.

A woman in Shenzhen’s Guangming New Zone brought in reporters from Metropolis to try to coax her husband into talking to her for the first time in 26 years for a report that was broadcast on July 23.

Mrs. Zhang on her knees begging her husband to talk.

Mrs. Zhang, who works in a factory in Shenzhen and has four children with Mr Zeng, claims that they don’t live together and they only see each other on holidays. “I don’t even know where he works,” she told reporters.

On one of the rare occasions he came to her home, Zhang brought reporters up to her front room and initially he would not turn around to face the camera. The reporter then said to Mr. Zeng: “Your wife has many questions she wants to ask you, would you mind answering?”

Mrs. Zhang then scolded him for refusing to speak, which suggests there is a reason why he’s scared of her.

The stand-off continued even after more family members entered the room and she said: “You’re going to drive me insane.” She then got down on her knees and begged him to talk.

The reporter gave it a try by asking him: “Is the reason why you don’t speak to your wife because she won’t let you?”

The reporter then asked: “Does she encourage you to remain mute?”

She then offered the suggestion that the reason might be he thought she was angry that he lost two fingers in a chainsaw accident many years ago, but she said she had repeatedly stressed that she wasn’t angry.

The narrator then suggested that the reason for his muteness may be that he has a pathological inferiority complex.

Then a female reporter who was sat between Mrs. Zhang and her husband said to Mr. Zeng: “Speaking is a joyful thing. Bottling everything up is bad for you. If you speak then we can know exactly what the problem is and who is to blame.”

A reporter, left, trying to get some answers out of Mr. Zeng.

The female reporter then said to him, while the cameras were rolling: “Look at your wife, turn your head and look at your wife. Do you fear her Mr. Zeng?”

Then, finally he spoke, muttering: “I do fear her a little bit.”

Then there was a buzz about the room as the reporter continued asking: “What do you fear about her? Please tell me.”

“Harsh in what way,” he was then asked by the female reporter.

Mr. Zeng said: “After we got married, she was often out with other people and seldom came home.”

The reporter then asked: “How do you know this?”

The report then ends by showing Mrs. Zhang with a guilty look on her face.

Zoos are supposed to be designed to protect people from animals, but sometimes they need to work the other way around.

Only two crocodiles are left alive of over a dozen that were placed in Rural Grand View Garden, a zoo in Shenzhen’s Guangming New Zone, Shenzhen Evening News reports. The cause of their death? Visitors throwing stones at them and polluting their habitat with garbage.

Visitors, particularly children, have been unimpressed by the hibernating beasts.

A journalist who visited the zoo this week reported that, as crocodiles hibernate during the winter, a lot of visitors have been shouting, spitting and throwing things at them to make sure they are alive.

Because the manmade lake in which they lived was full of garbage thrown by visitors, staff from the zoo went in to clean it this week but discovered that only two were still alive.

The zoo has issued warnings about such behaviour but staff say they have little power to stop it, for some reason.

Sina Weibo users have been less than amused by their compatriot’s behaviour. One user said: “Throwing stones is easy. They should go down in person and see whether the crocodiles are real.” Another said: “Are the zookeepers all fucking dead?” Some lamented the low character of the Chinese people, and others wished similarly unpleasent endings on the perpetrators.

However, the fact that there is so much anger suggests that awareness of animal rights is increasing in the Middle Kingdom.