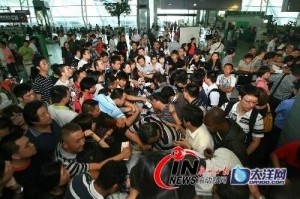 A crowded Guangzhou Baiyun Airport during the busy holiday

Missing a flight is an awful feeling, but rather than booking another ticket one guy in Guangzhou took it one step too far.

A man surnamed Wang was arrested on New Years Eve after he told authorities at Guangzhou Baiyun Airport that the plane he had just missed had a bomb on board, Sina News reports.

At around 1:40 p.m., Airport Security Authorities received a report from Wang about a bomb that was allegedly on board the plane whose gate had closed but had not yet taken off.

After it was discovered that he was lying, police arrested Wang, who was frustrated after missing the flight due to a traffic jam. His lie was in breach of provision 291 of The Criminal Law of the People’s Republic of China, and he is expected to face a heavy punishment.

The fact the plane was bound for Urumqi, capital of Xinjiang Autonomous Region, gave authorities extra reason to be suspicious as last summer a hijack attempt was made on a plane destined for the predominantly Muslim region.

Relations between the Han and Uyghurs (who are native to Xinjiang) are strained. This was made especially evident after riots broke out in Xinjiang in reaction to the killing of a Uyghur by a mob in Guangzhou in July 2009.