Three attractive young women stood at Luohu Checkpoint in Shenzhen bearing signs advocating the use of breast milk in light of recent restrictions on the purchase of milk powder from Hong Kong on March 8, International Women’s Day, CTDSB reports. 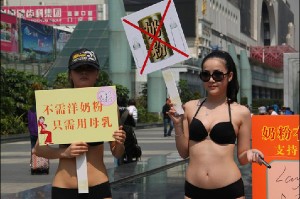 A sign urges onlookers to say no to milk powder.

The slogans on the signs read: “Limits on what you can buy don’t limit how much you can love;” “Milk powder is finite, a mother’s love is infinite;” “You don’t need foreign milk powder, you just need breast milk,” (the catchiness is somewhat lost in translation).

The issue of milk powder has become a flashpoint between Hong Kong and Mainland families, with Hong Kong mothers complaining Mainland shoppers have been buying up the territory’s supply, leaving none behind for local families.  Hong Kong has responded to concerns with a new policy enacted on March 1, which said the export of powdered formula for infants and children under 36 months, including milk powder and soya milk powder, is prohibited without a license. Individuals aged 16 or older are allowed to pass through customs with only two cans of 0.9 kilograms each, according to Hong Kong’s Information Service Department, as was reported in Global Times.

One onlooker told reporters that being breast fed was the reason why he grew up to be so handsome. 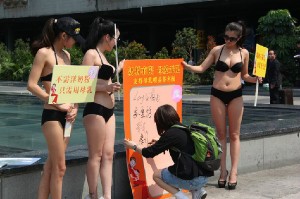 After getting dressed, the girls explained that they felt very strongly about the issue. But if their figures are anything to go by, none of them has any experience of breast feeding.