Shenzhen’s new airport terminal, which grabbed headlines with its futuristic design, suffered water leaks yesterday just weeks after opening due to recent heavy rains. Buckets had to be placed on the floor to prevent flooding, South China Morning Post reports.

Unhappy travellers took to China’s social media platform to complain on Sunday night, blaming the thousands of hexagonal skylight windows on the ceiling of the departure lounge. They said they not only brought in sunshine, but also the rain.

“What is this ‘honeycomb’ for? Thank God it’s not the typhoon season. Hours of raining have already created quite a few leaks,” a passenger from Shenzhen posted on Monday morning.

Not so state of the art after all, image courtesy of Sina Weibo

Studio Fuksas, the Italian company that designed it, that there had been leaking problems during the testing process, but they had been solved.

Hong Kong newspaper Wen Wei Po reported that leaking also happened in the parking lot and bus terminals. The leaking and poor working environment have even caused strikes at the air cargo department which have been causing delays since Sunday night.

Check out these photos of Shenzhen’s futuristic new airport terminal

The new terminal C at Shenzhen Bao’an Airport will open on November 28. Shenzhen Daily says 83,000 passengers are expected on the first day.

The airport will close at 10 p.m. on November 27 as final preparations are made for the opening of the new terminal which will be more than twice the size of terminals A and B combined.

Metro Line 11, the future airport express line, couldn’t be finished in time for the opening of the new terminal.

Metro riders who take the Luobao Line to the airport will need to take free shuttle buses to the terminal’s General Transportation Center after they get off the Metro at Airport East Station. The shuttle trip takes about 30 minutes, airport authorities said.

The new terminal’s Wi-Fi system will be able to handle simultaneous use by up to 3,000 people.

Here are some images of the new terminal, courtesy of Gizmodo: The interior of the terminal, which was designed by Italian company Fuksas 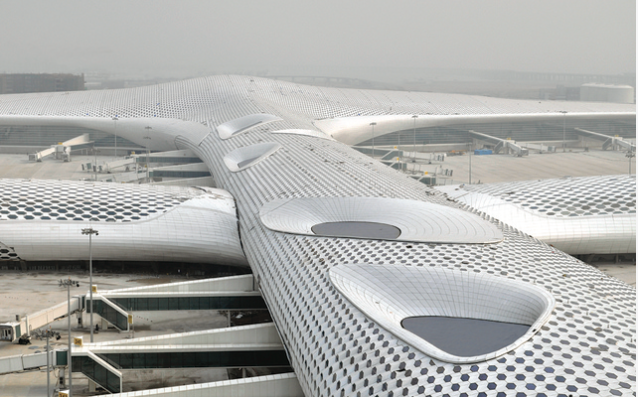 The gateway is designed to look like a manta ray and stretches for almost 1.5 km. Natural light pierces through the honeycomb design on the roof