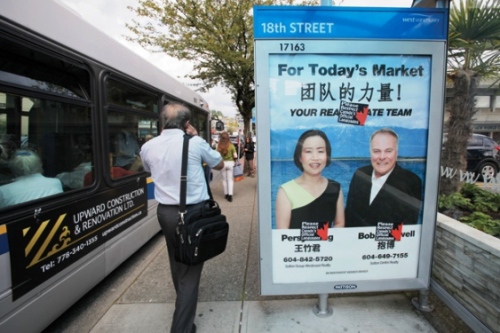 Brad Saltzberg, a spokeperson for the advocacy group Putting Canada First, wants the signs taken down. Last April, the group was successful in taking down Chinese-only ads belonging to the social service agency SUCCESS. Saltzberg states that if Chinese signs continue to proliferate, ”our whole city will appear to be Asian.”

West Vancouver Mayor Michael Smith does not see anything wrong with the signs, which usual market real estate and financial services, and are also written in English. Smith said, “I believe in personal freedom. If you pay your money you should be able to advertise your sign in any language you want. I’m not a racist. I don’t see why anybody would be offended by an advertisement in a different language.”

Saltzberg said “I’m proud to say I’ve never believed in multiculturalism for even one minute of my life.” Multiculturalism, a policy that promotes and encourages the proliferation of diverse world cultures, was nationalized in Canada during the 1970s.

The largest and oldest component of the Vancouver Chinese community are Cantonese, who write using Traditional Chinese characters. The Chinese written on the contested signs are written in Simplified Chinese, the language used by mainland Chinese, commonly alluded to as the newest immigrants to the Vancouver diaspora.

However, mainland Chinese have come under fire for causing Vancouver’s real estate prices to skyrocket. Their antics have lead to the inspiration of a reality TV show called Ultra Rich Asian Women that only stars Putonghua-speaking Chinese women.