There’s a lot of chatter about One for the Road in Dongguan.  It’s fair to say the venue has earned a strong reputation for serving up American-sized portions of food and cold beer. The Nanfang has visited the venue a couple of times and sampled the fare, so it’s time to put aside the hearsay and rumours and examine the place on its merits.  What we found is that while the bar hits many more times than it misses, it does have some drawbacks.

First up, the menu.  I think any bar anywhere in China would be hard pressed to compete with One for the Road on the sheer comprehensiveness of its menu.  It’s not uncommon for people to sit down and spend several minutes with the menu booklet, and we were no exception.

The menu is divided up into sections, with a few starters on offer (crab cakes, prawn cocktail, garlic bread, and the like), soups, and your regular selection of salads.  There are exactly 20 options for a “Main Course”, including everything from fish and chips to bangers and mash to lasagna, spaghetti, macaroni and cheese, chicken kiev, cordon bleu, and schnitzel.

The next page offers up “from the grill”, which includes steaks, pork chops, lamb cutlets, roast chicken, spare ribs (huge), and more.  This is before the pages offering hamburgers, pies, stews, and side order selections.  There isn’t enough time (or space) to list out everything, but suffice to say if you can’t find something you like on this menu, then perhaps you just aren’t hungry.

The concern with restaurants that serve up so much grub is that quality might suffer, and that might be the case here.  We ordered a caesar salad, which was far from authentic but still not bad by standards in China.  (Put it this way, we’ve had worse, like the one time a ‘caesar salad’ in Yangshuo consisted of shredded carrots and celery with thousand island dressing).

The macaroni and cheese is one pile of pure carbs.  A tray-sized plate with a mound of creamy mac and cheese on one half, and a mountain of mashed potatoes on the other.  Coupled with the requisite pint of beer, this will have you in a food coma in no time.  Mac and cheese was tasty, but you might want to order a few veggie dishes on the side (the coleslaw is pretty good) if you’re digging into this one.

We also tried the crab cakes and beef lasagna (OFTR also offers a vegetarian option).  The crab cakes were more like crab balls, and the portion was generous.  They were crispy on the outside and nice and soft on the inside, with a run-of-the-mill sweet and sour dip as an accompaniment. 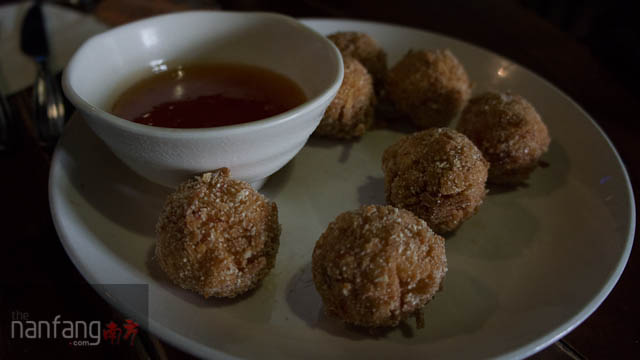 Crab cakes could’ve been a meal unto themselves…

The lasagna didn’t show up until almost 45 minutes after we initially ordered, and wasn’t quite what we expected.  It was baked and served in a bowl, rather than as a slide of lasagna on a plate.  It was piping hot, but was missing something; it was a very basic lasagna without any kick or spice or personality. 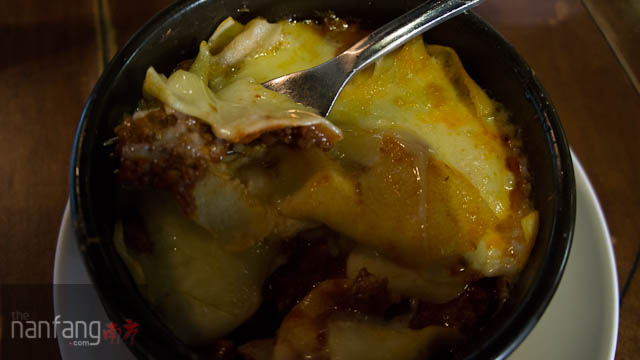 As for other dishes, people raved about the bangers and mash.  We also tried the ribs on a previous visit, and they were tasty.

So what’s the drawback? Well, service, for starters.  On several visits, service was sporadic at best.  If the place is full (which it often is), it could take a while to get a server to pay attention to you, and even longer to actually get your food.  When we visited recently, we took an empty table and waited more than 10 minutes before somebody even noticed we were there — and even then, it was because we shouted “fuwuyuan!” to get some service.

The menu might be a little too extensive, as some dishes aren’t quite up to snuff.  OFTR could easily drop a few dishes that it doesn’t make well (like our lasagna) to ensure every item on the menu is top notch.

Also, we were recently there during an F1 race, and it seemed whoever was in charge of entertainment couldn’t figure out whether the audio on the race should be turned up, or music should be played.  It alternated annoyingly between the two a few times before racing fans finally won out.

Finally, smoking seems to be allowed inside, which is great for those who like to light up and not-so-great for everybody else.  The decision to allow smoking inside is probably related to the clientele, which consists of real died-in-the-wool pub-going expats, many of whom smoke.  But considering OFTR has an outdoor seating area, allowing smoking inside is somewhat questionable.

Now, about that clientele: the bar definitely has its regulars.  If you come more than twice, you’ll notice familiar faces sitting around the long horseshoe shaped bar or playing pool at one of the two tables.  It’s these regulars – plus the beer and extensive pub grub menu – that has turned OFTR into an institution.

If you’re looking for gourmet food, a romantic night out, or a quiet glass of wine, you’ll be sorely disappointed here.  But for a greasy hangover-fixing brunch, burger, or pile of mashed potatoes with beer and buddies, you can’t go wrong — just know you’ll probably have to wait a while to fill your tummy.

More on The Nanfang: