Is the Cantonese tradition of eating bugs set to take off around the world?

China Daily has published a report claiming that the Cantonese tradition of eating creepy crawlies may be set to take off around the world.

It is famously said Cantonese will eat anything with four legs but the table and anything with wings except planes. The China Daily article was published in reaction to a report by the Food and Agriculture Organization of the United Nations titled Edible Insects: Future prospects for food and feed security.  It argues that eating insects is one facet towards a sustainable food supply.

Calls for humans to eat bugs is nothing new. In 2010, ecologist Martin Dicke pointed out in a TED lecture (video below) that humans consume an unhealthy and unsustainable amount of meat. He claims that delicacies like locusts and caterpillars compete with meat in flavour, nutrition and eco-friendliness.

If you don’t have time to stream the lecture, here are some of his key points about the benefits of eating insects:

1. Human Health – Insects are so distantly related to us that there is no recombination of viruses harmful to humans such as swine flu.

2. Conversion factor – For every 10kg of feed, 1kg of beef and 3kg of pork can be produced. This is in contrast with 9kg of locusts.

3. Environment – Point 2 shows how much manure is produced through the farming of cattle and pigs.

4. Why not? – 80% of the world eats insects anyway. Europe and North America are simply lagging behind.

Here are some of the Cantonese staples that the China Daily article recommends:

In Zhanjiang, peanut worms are harvested in shoals. Zhanjiang restaurants clean the worms and clear them of sand by first turning them inside out with a metal wire equipped with a small hook. They are either steamed with chopped garlic and glass noodles, fried like French fries or boiled in rice porridge. 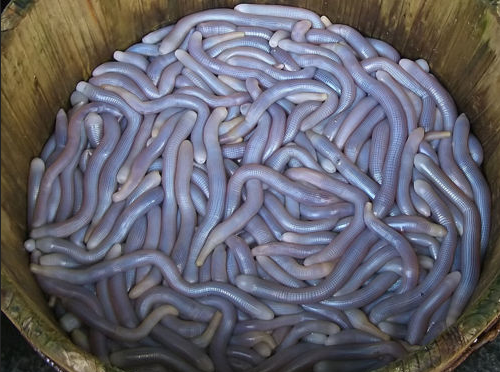 “They are a bit expensive, like 50 yuan per kilogram, but they’re cheaper after a typhoon because many are washed ashore,” Zhang Li, a Zhanjiang resident, told the paper.

She said peanut worms go particularly well with rice porridge. Dried peanut worms are also available and can be used in soup to give it a medicinal quality.

Scorpion soup is often recommended by traditional Chinese medicine (TCM) doctors to cancer patients. The doctors believe the poison of the scorpion’s stinger combats cancer, making the critter a key ingredient in TCM. “We make scorpion soup once a month on average but one cannot drink too much of it,” said Chen Yingkui, another resident of Guangzhou.

Chen added that eating scorpions acts more as a preventative measure against illnesses than as a cure.

It is recommended to use only the relatively soft and protein-rich abdomen, which tastes vaguely like the meat of a turtle or a crocodile.

They are also used in medicine and are believed to help combat diarrhoea.

There are many more so if you plan to delve into this world, it might be a good idea to have a Cantonese person lead the way so you get the most out of the experience.

White Mandarin speakers are now more common than Jeremy Lin stories, so it’s no longer so impressive when a laowai opens his mouth and Putonghua comes out.

The same can’t quite be said for Cantonese, however.  The language is difficult, with some estimating it contains anywhere from six to nine tones.  To make matters worse, there isn’t the same standardized romanization for Cantonese, like pinyin for Mandarin.  Yes, standards exist, but none have become dominant (the MTR uses different standards for different station names, even).

The topic of Cantonese is an interesting one in our region.  While Guangzhou is the heart of the culture, the Cantonese language is slowly becoming maligned in the city.  It’s common to travel in Shenzhen or Zhuhai and not hear it at all, as those cities were largely populated by migrants over the past 30 years.  But Cantonese pride is as strong as ever, as evidenced last year when protests erupted in both Guangzhou and Hong Kong over the government’s plans to limit television broadcasts in Cantonese.

This is a roundabout way of saying the language may not have the reach of Mandarin (although even this is debatable, considering the plethora of overseas Cantonese communities), but that could be because it is far more difficult to learn for non-native speakers.  Which makes these two white kids even more impressive.

Make sure to watch the whole thing, as their imitation of Cantonese English is pretty much spot on (we could do without the videographer’s stale commentary, however).