A brand name makes things better, doesn’t it? Why buy generic when you can put your trust in a prestigious, well-known brand?

A vacant retail space in Chengdu, Sichuan, agrees. But it seems no well-known brands have decided to rent space in the mall yet, so the mall went ahead and used the next best thing: fake brand names and logos.

So to help draw attention to the vacant retail lots still awaiting their first client, the 300 meter long street is adorned with brand names that seem oddly familiar.

Not pictured are a sign with the “M” logo from McDonald’s turned upside down into a “W”, and a fake version of Pizza Hut called “Pizza Huta”.

When contacted by a reporter, the sales office for empty retail lots passed the buck by explaining the signs were already hanging there when they first tried selling them. When questioned, the property developer explained their motives:

In waiting for these stores to be rented, fake signs are hung to create a business ambiance for the contractor. Once these lots have been rented out, these signs will be taken down.

Ambiance: it’s only ever a fake brand name away.

The Guangzhou Baiyun International Airport is now offering passengers the option of using a unified automated check-in system. Passengers can now check-in their luggage and receive their boarding passes without any messy or ineffectual human interaction.

There are about 50,000 domestic workers in Shenzhen working in a mostly unregulated market, and the demand by middle-class families is increasing. Usually entering China via Hong Kong, these workers that mainly originate from the Philippines and Indonesia are now being brought over directly from their home countries because it is easier to bring these people are “more honest and hard-working”. 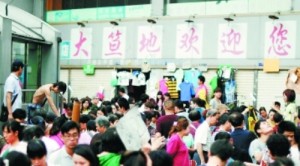 April 21 marked the very last day of the Dadadi Market, a stalwart Guangzhou institution for cheap bargains. Now closed, the management intends to move the market to another location on Longjian Street, but negotiations have not yet produced any results, something to do with trying to haggle down the price, we think.

China’s first court to specifically deal with intellectual property right disputes will be set in Guangdong province. Last year, there were 88,286 such civil cases. If successful, we may see this pilot program be copied throughout other parts of China.

Numbered in the tens of thousands and having spread to nearby Jiangsu Province, the Yue Yuan shoe factory strike ratcheted up tensions with the detention and disappearance of two labor activists, Zhang Zhiru and Lin Dong.

The Guangzhou anti-graft commission has finally responded to charges of corruption by saying that it has “never made a mistake in any of its cases“. A March 28 trial of Dai Yuqing, former head of Guangzhou Daily Group, saw Dai hurl accusations of corruption against Wang Xiaoling, the head of the city’s anti-graft authority; furthermore, Dai had withdrew his confession, an unheard of act in China law.

Two hostages were released safe after a knife attack in Shenzhen in which police subdued the suspect, Wu, during hostage negotiations.

Tragedy in Shiling County near the City of Zhanjiang: father Qiu Jifeng dies suddenly at work on April 14 just weeks after his 5 year-old daughter Wenwen was crushed to death by a falling wall at the Tangjia Elementary School On March 28.

Guangzhou plans to construct 2,500 new digital libraries in three years time. They will be located in neighborhoods across the city and join the 50 prototype models already in use.

The third annual Asian Student Supercomputer Challenge (ASC14) is set to take place in Guangzhou. $29K in prize money will be awarded to one of the sixteen competing university-backed teams that are able to build a system and code like a svelte cheetah.

The Kidz with Heart Mini Olympics will have 250 participants involved in the May 10 Shenzhen fundraiser organized by Captivating International, a anti-poverty charity.