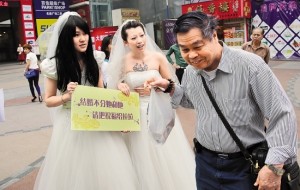 For the love of his gay son: A Chinese father’s coming out story

A child’s coming out story is often hard. But behind the brave steps taken by a gay son or daughter, it’s often forgotten how difficult it is for his or her parents to come out about their child’s sexuality to their friends. In a sense, when one person comes out, the whole family comes out – something rarely discussed in Mainland China.

For Mr. Li, known as “RoseDad” on Sina Weibo, his son’s coming out was something he wanted to handle well. He said he saw his son no differently than he always had when he came out to him last October.

“Nothing has changed,” says Mr. Li. “We love him even more.”

Last month, Li flew to Guangzhou to share his son’s coming out story at PFLAG China – the headquarters for parents and friends who support their gay and lesbian children. The event drew about 100 people. Among them were 15 mothers, far more than the only two dads who attended in support of their sons’ sexuality.

Asked about saving face in the culture, Li says accepting ‘it’ is difficult. “Why did this happen to me?” he thought upon first hearing the news. He even contacted a psychologist-friend of his, thinking that his son’s sickness could be cured.

Men are still considered to be the dominant figure in most Chinese households.

The youngest of three siblings, Li grew up during a time when students were sent to the countryside to work as peasants. He did four years of farming in the countryside before attending university, graduating in 1983 and becoming an English teacher.

It was at the riverside in Fuzhou, Fujian where Leon, Li’s son, came out. At the time, Li admitted he thought his son had a mental disease. That night, Leon showed his dad a video presented by Li Yinhe, a sociologist, sexologist, and supporter of the LGBT community.

Li soon made an appointment with a PFLAG member to learn more about what being gay is all about. “I made a decision that I had to learn this new topic,” says Li. “I read articles and watched a video.”

Leon came to the realization that he was gay more than 20 years ago. Li realizes the pain that his son had to endure throughout his life, and especially during the coming out process. While working in Shenzhen, Leon popped across the border to Hong Kong and received an LGBT pamphlet.  Leon’s mother soon found the pamphlet, which lead to Leon deciding to come out about his sexuality.

“Why do I want to escape from my family?” Leon says. He is now living with his family in Fuzhou.

Li told his mother-in-law about Leon being gay. Leon’s grandmother, 90, doesn’t understand what being gay is all about. Still, “she didn’t hesitate to accept him. It’s a simple feeling,” said Li.

Li has already discussed relationships with Leon and has made an agreement with him: he will support his son with his boyfriend, but the relationship has to be a long-term and stable one. This is one of Li’s basic principles, and is not much different than parents would expect of a heterosexual couple, too. Parents want the best for their kids, no matter what.

“One should fight for his lifestyle; he shouldn’t care about what others think. Others should admire you, so you shouldn’t be afraid,” he said.

A plane crashes into the sea near Zhuhai, all three on board survive

For the love of his gay son: A Chinese father’s coming out story

Mistress, dumped by Guangdong party boss, calls up six girlfriends to beat him up