A plane crashes into the sea near Zhuhai, all three on board survive

A light aircraft crashed into the sea near Zhuhai Airport on Wednesday, and miraculously all three people on board survived, People’s Daily reports.

The cause is thought to have been an engine failure during the landing procedure, but the investigation is continuing. 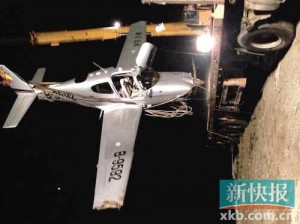 The plane after being salvaged, courtesy of People’s Daily online

The accident disrupted activity at Zhuhai Airport with no planes taking off for an hour.

All three people on board were members of the Han Star General Aviation Company and none suffered any more serious harm than getting their clothes wet. They were found in a lifeboat by local Coast Guard captain Zeng Zhangrong around an hour after the crash.

The plane was salvaged that night at around 10:15 and the nose and tail are both severely damaged.