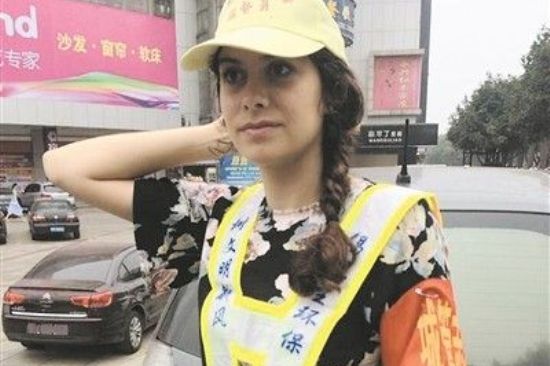 A 21 year-old expat from the UK named Leah has become Henan’s newest pedestrian traffic warden responsible for herding pedestrians in the city of Zhuzhou and ensuring traffic laws are maintained, reports Yangtse.

Like many cities, Zhuzhou has a problem with pedestrians that don’t follow signals at intersections and end up congesting traffic — and it may have found its solution in Leah.

Though Leah has only a limited grasp of the Chinese language, her “foreignness” compels city residents to follow her command where they would normally ignore their fellow countryman.

Leah and her friend Ewan recently graduated from university and had been in Zhuzhou looking for work as English teachers for a month. After being hired as a warden, Leah immediately went to task memorizing the important phrases of her job. So far, she can only say things like:

At first blush, perhaps it would seem unlikely for a Chinese person to follow the commands of a foreigner that can’t converse in Chinese nor is intimately familiar with its local customs. However, an unnamed resident sums up why they listen to her:

As there are international friends present, how can we (residents) illegally cross the road without feeling any shame?

The societal construct the Zhuzhou chengguan is employing is “face”, the need to maintain respect from others. If a Zhuzhou pedestrian were to illegally run a red light in the presence of “normal” Chinese chengguan, they wouldn’t risk losing face as much because they wouldn’t care about the reaction.

However, if this was done in the presence of Leah, a foreigner, the Chinese would risk losing face to the entire outside world she represents. Furthermore, the face lost wouldn’t just be his or her own, but the entire country, which the offender represents.

I mean, just what would Leah think? Of China, no less.