The problem of gropers on public transport in China has become so severe that an extraordinary range of preventative measures have been dreamed up by entrepreneurs and government officials. These include designated women-only areas, anti-pervert hairy stockings, and anti-pervert shoes.

However, some gropers are so determined and shameless that the problem is unlikely to completely go away. Check out this guy who approaches a teenage girl from behind, bear hugs her and then forcefully kisses her on an escalator in Shenzhen’s Tianbei Subway Station, footage courtesy of Jiangsu Television.

The girl immediately called the cops. And last night, the Shenzhen Public Security Bureau reported on its microblog that the man, surnamed Wang, had been arrested.

Left-wing U.K current affairs magazine The New Statesman published an interesting piece this week about a woman’s emotional recovery from being sexually harassed on the London Underground. Her method? To do an interpretive dance on the spot on which she was harassed.

Shenzhen Metro’s Longgang Line (Line 3), which has received numerous complaints due to being too crowded, will see shuttle trains added at its busiest section during rush hours Monday to Friday starting Jan. 21, SZOnline reports. 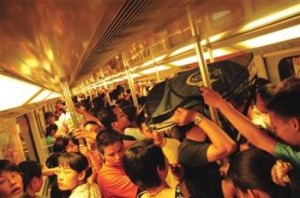 During rush hours, scenes on the subway are similar to the one in this picture, taken from Baidu Images.

The shuttle trains will run between Tangkeng and Huaxin, where 62.8% of passenger flow is concentrated along the line.

Netizens have reacted positively to the news. Since the subway system was rapidly expanded ahead of the 2011 Summer Universiade, residents have complained on threads such as this that the crowding is considerable. This author can tell you from experience that they’re not exaggerating.

The line connects with the Luobao Line at Laojie and Shopping Park, with the Shekou Line at Futian, with the Longhua Line at Children’s Palace, and with the Huanzhong Line at Buji.