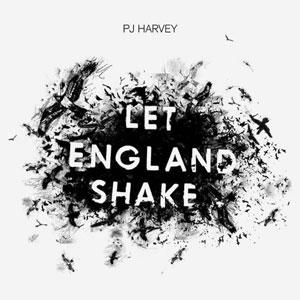 A friend of mine asked me the other day what record I was reviewing this week. When I told him PJ Harvey’s Let England Shake, he replied: “PJ Harvey; she’s still around?” A fair question I suppose. Other than the 2009 John Parish collaboration, A Woman a Man Walked By, in which Parish wrote all of the music and played most of the instruments, Harvey hasn’t released any new material since 2007’s White Chalk. Following rumours of retirement, I began to wonder if I would ever again hear that snarl and deft songwriting that I have loved so much since Harvey’s 1992 debut, Dry. I’m therefore happy to report that not only is Harvey back, she’s back in fine form.

Recorded in a converted church overlooking the Dorset coast of Southwestern England, Let England Shake is simultaneously the most beautiful and raucous album Harvey has produced since 2000’s Stories from the City, Stories from the Sea. As the title not so subtly suggests (subtlety has never been Harvey’s strong suit), there is a political current running throughout the record. Often literal, often literary allusion, Harvey has crafted a record as lovely as the English countryside and as tumultuous as the country’s rich history.

The record opens with Let England Shake, a mid-tempo, jazz infused number. Despite the boppy, up-beat nature of the instrumentation, the opening lyrics are anything but: “The West’s asleep. Let England shake, weighted down with silent dead. I fear our blood won’t rise again.” Yikes. And just in case you think the opening track is a one-off, Harvey clarifies the record’s intention on the following track, The Last Living Rose. The song opens with nothing but Harvey’s electric guitar and bass drum before swelling into a beautiful tenor sax solo: “Goddamn Europeans! Take me back to beautiful England. And the grey damp filthiness of ages.” This essentially sets the tone for the record.

Let England Shake is both a damning of England’s militaristic past while expressing uncertainty of its future. Harvey clearly wants to agitate the agitators into agitating what was once a mighty empire. As a result, the lyrics are often graphic and harsh, taking no prisoners. This is no more apparent than on first single, The Words That Maketh Murder, where Harvey spews disturbing imagery: “I’ve seen soldiers fall like lumps of meat, blown and shot out beyond belief. Arms and legs were in the trees.” Before you can catch your breath, she coyly drops the stunning piano and slide guitar infused coda, borrowing Eddie Cochran’s popular refrain: “What if I take my problem to the United Nations?”

Politics aside, Let England Shake aptly demonstrates Harvey’s ability to write gorgeous melodies juxtaposed with razor sharp lyrics. Experiencing Let England Shake is like someone telling you they love you and then immediately slapping you across the face: you’re too busy processing the former to contemplate the sheer force of the latter. As a result, Let England Shake requires a few listens to even scratch the surface.

Aside from the audacity of the lyrical content, what I enjoyed most about Let England Shake is what remains the strongest element in Harvey’s arsenal: her voice. Though mostly sung in her upper-register, the versatility she employs here is staggering. Whether being pretty (Hanging In The Wire), vicious (Bitter Branches), or outright angelic (On Battleship Hill), Harvey’s vocals sit perfectly in the mix, open to all of the praise and scrutiny they have always garnered. This is also a credit to the producers (John Parish, PJ Harvey, Flood, and Mick Harvey), who ensure that regardless of the tone Harvey takes vocally, the lyrical punch doesn’t get lost in the mix. My only gripe is Written On The Forehead in which Harvey’s vocals are unnecessary processed and take away from what is otherwise an engaging track.

Though an unabashedly English record, one does not need to be English to appreciate Let England Shake. In the hands of a lesser songwriter, perhaps that would have been the case. Harvey however is too good and too socially aware to let the narrative get away from the music. As a result, she has crafted a triumphant return and given us a record that can be enjoyed regardless of what side of the Atlantic you might be listening from.

The Spin Doctor – Iron & Wine, Kiss Each Other Clean

Sam Beam, better known as Iron & Wine, has two main camps of fans: the first are those who fell in love with the whispery, soft lullabies of his first two Lps, The Creek Drank the Cradle and Our Endless Numbered Days consisting of little more than acoustic guitar and Beam’s beautiful, hushed vocals. The latter camp side with the fuller, rich production, and backing band affairs of The Shepherd’s Dog and Beam’s collaboration with Calexico, In the Reins Ep.

In the interests of full disclosure, I must concede I have always been firmly in the first camp. After watching Beam perform with his band just prior to the release of 2007’s The Shepherd’s Dog, I couldn’t quite grasp why a songwriter who could have audience members eating out of the palm of his hand with little more than his voice and an acoustic guitar would invest in a 7-8 piece backing band to reinterpret songs that clearly were not in need of reinterpretation. It was a frustrating affair and somewhat exemplary of the age-old musical mantra “less is more”.

Thus it was with a certain apprehension that I made my way through Iron & Wine’s most recent effort, Kiss Each Other Clean. Would Beam move to an even bigger sound or would he instead appease the fans of his earlier releases? Well, the answer is that he has picked-up much where he left off with The Shepherd’s Dog. However I’m happy to report that’s not entirely a bad thing.

Lead track Walking Far From Home blends both worlds of Beam’s sound in a way I haven’t heard since the Woman King Ep. The gorgeous hymn opens with a layered and slightly processed vocal from Beam accompanied by a distorted organ sustaining a few simple chords: “I was walking far from home, where the names were not burned along the wall. Saw a building high as heaven but the door was so small, door was so small.” Despite the big, bold production, which includes organ, piano, xylophone, percussion, and backing vocals, the track retains the simplicity of the verse-verse styling’s Beam executed so well on his earlier releases.

Beam wastes no time however in switching things up. Me and Lazarus enters with a synth drone, a variety of percussion and bass before introducing acoustic guitar, saxophone and what sounds like a pan flute. It’s a bold choice and clearly an attempt to push the constraints of what an Iron & Wine record can or should be. The problem is it doesn’t exactly work. The sax acts more as a distraction than contributing anything authentic to the melody. This is also the case with Big Burned Hand which is best described as overkill. One part jazz, one part funk, Beam’s vocals get lost in the mix and the arrangement simply doesn’t go anywhere.

Then you get to Monkeys Uptown and everything falls into place. Beam has become a master of multi-tracking his vocals and here the process works to gorgeous effect. Likewise, all of the instrumental additions fall seamlessly into the mix. This effect is executed with even greater results on album standout Rabbit Will Run. While a distorted, electric organ attempts to tear a hole through the middle of the mix, Beam sings: “We bricked up the garden and oh what it means, and we’ve all kissed a virgin as if she were clean, and I still have a prayer despite all the colours I’ve seen.” It’s a stunning moment and a true illustration of how far Beam’s songwriting has come since The Creek Drank The Cradle.

What I found most impressive about Kiss Each Other Clean is the evolution of Beam’s vocal. Where he previously sang in little more than a whisper, here he has a tendency to swing for the rafters and is all the better for doing so. His vocal at the conclusion of the epic Your Fake Name Is Good Enough For Me, which is divided into two distinct parts, plays like a protest song: “Become the bandage and the blade, we will become, become. Become the word and the breath, we will become, become.” Beam sings like his life depends on it and as a result, it resonates in a way it never has before.

Despite a clear step forward in Beam’s songwriting I would be lying if I said I’ve been converted to that second camp. I will concede however that I’m now excited to see where he might go next and that’s more than reason enough to continue to explore the nuances of Kiss Each Other Clean for another week… or maybe two.

Smith Westerns’ Dye It Blonde is all about managing expectation and seeing it for what it is: a decent fuzzed-out, glam-rock record with some interesting synth moments; nothing more, nothing less. Yet, this young band from Chicago have sent critic’s hearts a flutter: a best new album award from Pitchfork, a 9 out of 10 from Spin and numerous other critical accolades. So what am I missing?

Smith Westerns released their self-titled debut in June of 2009, while they were still in high school. Recorded primarily in guitarist Max Kakacek’s basement, it was a rough, lo-fi affair (they tracked their seven-inch using the built-in microphone on their digital four-track), yet despite the rawness of the record it worked and caught the ear of Fat Possum Records who signed the band in the spring of 2010. Fast-forward to 2011 and their follow-up, Dye It Blonde, cut in a real studio, with a real producer, is quite a departure from their raw debut.

Dye It Blonde was produced by Chris Coady, who produced Beach House’s Teen Dream, one of my favourite records of 2010. However, where the dreamy atmospherics worked effortlessly on Teen Dream, here they get lost in the ether. This is largely a result of frontman Cullen Omori’s voice. Though layered/multi-tracked, and clearly produced to float effortlessly over the mix, it’s void of any punch. Thus highlighting the real issue with Dye It Blonde: as undeniably catchy as some of these songs are, there’s strangely a lack of substance. On the majority of the tracks the drums and bass are so far back in the mix as to be rendered negligible. Meanwhile, Kakacek’s guitar work, though fantastic on tracks such as Imagine Pt. 3, and Fallen In Love, often sounds more processed than authentically fuzzy. That said, when it works it works. Standout track Still New gets it all right: “I want to tell you, you’re hard to resist…” Omori croons while Kakacek drops a shimmering guitar line. On Only One, Kakacek plucks a jangly guitar figure that wouldn’t have sounded out of place on an old Byrds record before exploding into a gorgeous coda.

Thus I find myself back where I began: attempting to manage expectation. Dye It Blonde is a decent record, but not a great record, which hardly seems like an insult considering how young the band is. Smith Westerns are clearly a band still finding their sound, and I suspect that a record or two down the road they may actually be worthy of the critical accolades. Until then, easy with the Bowie references.