While every day is a good day to wave a flag, Chinese online media were thumping their chest with pride recently when it was discovered that Chinese internet slang has entered the Western lexicon by being published in an online dictionary.

The entries included English versions of Chinese internet slang like no zuo no die, which means “If you don’t look for trouble, you won’t find any”; you can you up, no can no bb, which means “do better if you can, otherwise stop complaining;” and zhuangbility, which means to be a “poser” or “pretender”.

The media fanfare over this momentous event was swift and strong. CNR took a step back and looked at the big picture with a long-range telescope:

Yangcheng Evening Report implied a mission had been accomplished with this introductory line:

The Beijing Evening Report called the entry deserving of “applause” and echoed a military sentiment by writing:

Chinese Popular Internet Slang Has ‘Invaded’ an US Online Dictionary

But it was the People’s Daily who was most enthusiastic of the entry with its introductory lede that affirmed, ”English speakers may soon be saying “you can you up, no can no bb” in response to criticism.”

And why not? After gifting the world with the compass, porcelain and paper, China’s gift to the world will be a more streamlined world that isn’t weighed down by oppressive prepositions.

The media’s nationalist sentiments arrive as the mentioned Chinese internet slang are accepted and published by that venerable internet institution, the Urban Dictionary, and forever destined to remain respected additions to the pantheon of human wisdom through the miracle of open sourcing.

As can be seen in the above screenshot published on sites like Ecns, the entry “no zuo no die” joins Urban Dictionary alongside trending terms like tittybong, queef, poopsterbate, and alabama hot pocket.

Congratulations are in order. China, you’ve been validated by the distinguished hallmark of respect that defines itself in its own coffers as:

[Urban Dictionary:] A place formerly used to find out about slang, and now a place that teens with no life use as a burn book to whine about celebrities, their friends, etc., let out their sexual frustrations, show off their racist/sexist/homophobic/anti-(insert religion here) opinions, troll, and babble about things they know nothing about. 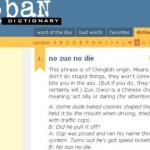 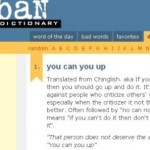 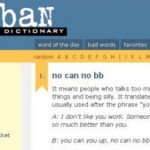 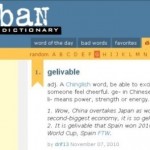