Although there are plenty of bars and nightclubs all over Dongguan, Dongcheng Bar Street is the most popular, especially amongst foreigners. In the past few months a number of bars have opened in another part of the city that has collectively been dubbed Nancheng Bar Street. Intrigued to see how the new bar street compared to its namesake, I recently headed down on a Saturday night with a few friends.

Hidden behind some of the tallest buildings in Nancheng, the bar street is made up of a group of brightly lit and unusual buildings. We walked along the street, reading the unfamiliar and slightly confusing English names of the bars until we came upon Castle Bar. We recognized the name from an advertisement in one of the local magazines and so decided to give it a try. 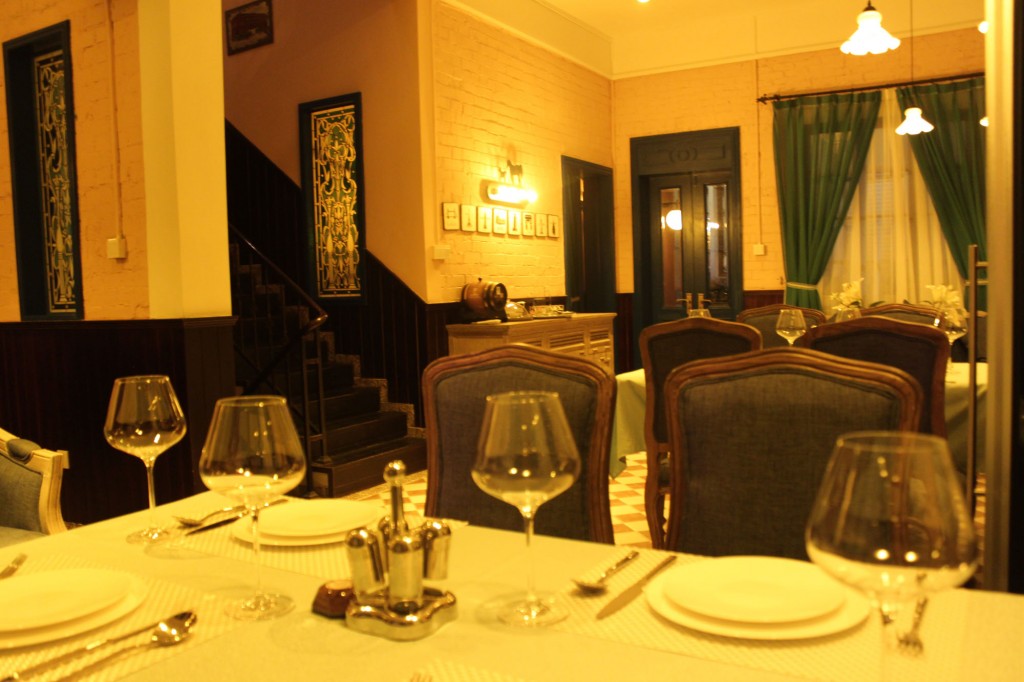 We headed to the roof terrace and on our way up we checked out the rest of the bar. It was not very busy but the décor was lovely. There was black and white tiled floor, long polished bars, creaky wooden stair cases and narrow corridors that you couldn’t help but explore. It tried to recreate the look and feel of a café from Paris or a bar in Barcelona, and while it lacked the authenticity, I found it a convincing imitation.

After many steps and much heavy breathing, we finally reached the terrace. As I caught my breath and looked around I was slightly disappointed. There was no sign of the big screen that the bar had recently been advertising. It was a pity as Dongguan is lacking outdoor venues to watch live sports.

From the terrace I could see how these new bars had been built onto the rundown buildings and dirty alleyways behind. The way that these bright and glamorous bars hid the grim reality behind reminded of a set from a Hollywood studio. However, I found this only added to the charm.

The service was friendly but slow. I waited ten minutes for a bottle of Corona and my friend waited a further ten minutes for a Mojito. It is perhaps a bit rich for me to complain about the time it took for our drinks to be served considering we decided to sit up on the fourth floor. Also, when the Mojito did arrive it was served in a beautiful glass and looked every bit as good as my friend claimed it was, which almost made it worth the wait.

There were also some errors in the menu. When my friend ordered a bottle of Budweiser he was served one of the small cans they bring in by the bucket load in the nightclubs. Also, the inclusion of Boddingtons as a German beer might offend some fans of British beer.

As we drank, a dance competition was taking place on the adjacent bar terrace. The dancing women led to one of my friends insist that we finish our drinks and try the bar next door. It’s name: Elopement Bar. The bar was similar to Castle Bar. The décor was not as impressive but still charming enough. Above the entrance a neon sign flashed with the bar’s name that reminded me of the sort of wedding chapels you find in Las Vegas.

By the time we had arrived the dance competition had finished so we decided to sit at one of the tables on the street. There were some other groups around us and with people walking past we felt more involved than we had on the terrace. However, there was no music playing which seemed strange, especially on a Saturday night.

Once we were seated we were surprised to be presented with a menu that had been printed off Excel. Their choice of beer was no better than what you could find in your local convenience store. Uninspired by the beer selection, I chose a cocktail at random and was served with a pink drink that while enjoyable, was so sweet that it was probably worse for my teeth than a bag of skittles.

The waitress who served us seemed to find foreign customers something of a novelty. She was keen to chat and joke, which can come across as naïve and charming or overbearing and annoying, depending on your mood.

Later, the manager was kind enough to offer us some complimentary snacks. He claimed that they were a delicacy from Xiamen. It did not look particularly appealing but the way my friend finished the plate suggested they tasted a lot better than they looked.

By the time we had finished our sweet drinks and free snacks it was already past midnight. Those of us who had an early start in the morning had started to yawn and those that were looking to stay out late were already making plans to head back to the more familiar surroundings of Dongcheng. We paid our bill and grabbed a taxi back.

I was quite impressed with Nancheng Bar Street. It seems to be a compromise for those who want somewhere a bit more interesting than the noisy clubs of Dongcheng Bar Street but not quite as isolated as the bars and cafes of Batou Village.

Although my experience in Elopement Bar was more enjoyable, it was Castle Bar that intrigued me the most. It certainly has some work to do with its service but hopefully it will improve over time. I’ll be back again in the near future and I would recommend that anyone who wants to try something different to Dongcheng Bar Street do the same.