Do food safety scandals in the PRD make you think twice before chowing down? 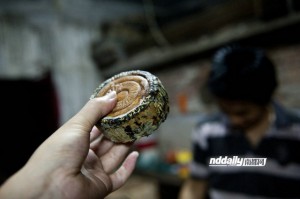 The Nanfang can reveal a cutting-edge weight loss technique: think about the safety of the food you’re eating.

Yup, food safety is making headlines again and recent revelations coming out of the PRD are among the most frightening yet.

This week Shenzhen Daily, a publication not normally given to paranoia or hysteria, revealed that ducks in the city’s Nanshan District were having their feathers removed with a cancer-causing banned asphalt before being supplied to retailers.

Moreover, the duck processing workshops were based in Nanshan District’s Tongle Community, which is not one of the more deprived parts of the city. The ducks could well have been bought up by high-end restaurants and supermarkets, not just street vendors.

Another nauseating story came from Dongguan’s Nancheng District when on September 24, recycled expired mooncakes were discovered. This comes on the back of a similar scandal we told you about last year in which 8,000 boxes of fake mooncakes were found in Guangzhou. Or the case of bamboo shoots being washed in toilet water in Dongguan. We could go on.

When high-profile blogger Charles Custer left China this year, he cited food safety as one of the main things that turned him away from the idea of starting a family in this country. Is it making you question the wisdom of staying here?

The best known scandals of recent years are probably those of gutter-oil, which means cooking oil made with recycled waste oil, and the milk powder scandal which had an estimated 300,000 victims and involved official, as well as corporate, corruption.

Considering all these revelations, does Western junk food suddenly seem healthier than before?