Yangcheng Evening News writes that your Yang Cheng Tong, or Ram City Pass if you will, could be integrated with buses, taxis, ferries and metro lines in Hong Kong and Macau next year. By the end of this year, the Yang Cheng Tong will be fully integrated with transportation routes in Shaoguan, Heyuan, Yunfu and Zhuhai, including the small fare discount gained when the card is used instead of cash.

It remains to be seen if Yang Cheng Tong holders will be able to store value in the card when commuting outside of Guangzhou. 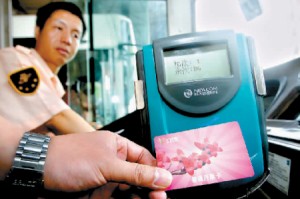 The Yang Cheng Tong was introduced in December 2001, and in addition to all buses, subway lines and licensed taxis in the city, can also now be used in more than 1,000 retail outlets in Guangzhou. With more than 25 mln cards in circulation throughout 8 cities in the province, the Yang Cheng Tong is reportedly the third most widely used transportation smart card in the country.

According to Yangcheng Evening News, functionality for the card has been steadily expanded since 2003, when support for the Yang Cheng Tong was introduced in Foshan. As of 2010, the Yang Cheng Tong could be used in Guangzhou, Foshan, Zhaoqing, Jiangmen, Shanwei, Huizhou, Maoming and Jieyang, and we can expect support in Shaoguan, Heyuan, Yunfu and Zhuhai to arrive with the next few days.

In August this year, an agreement was signed with the operators of the Octopus card, setting Hong Kong and Macau on the path toward offering support for the Yang Cheng Tong.