Is it worth visiting Dongguan? A Toronto-based designer says absolutely 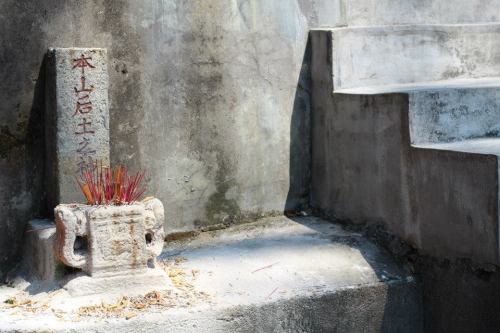 Nell Chitty is a Toronto-based designer who had just finished her Master of Design degree in Inclusive Design when she took her recent trip to China as a graduation present. She visited her childhood friend who now lives in Dongguan and teaches music at an international school there. “Ultimately, I was a tourist,” she says.

While there, Nell took a select few photographs of a temple in Qifeng Park, one of Dongguan’s best-known attractions that is ranked #4 of things to do in Dongguan by TripAdvisor, that will perhaps give readers a small window into the location. She also documented her visit to Dongguan and other cities in the PRD in her blog The Black Beret In China. Check out all Nell’s photos below (republished with Nell’s consent).

Nell, thanks for chatting with The Nanfang about your time in Dongguan. Would you tell us about your impressions of the Dongguan temple you visited?

I visited one temple in Dongguan. I believe it was in Qifeng Park, but unfortunately I do not remember its name. I have the ticket from admission, but I cannot read the Chinese characters.

I went to the temple for both a cultural experience and to take photographs as my friend said it was very beautiful. The temple was one of the most interesting places I’d been to in Dongguan. I loved the tiled roofs, the traditional architecture, and the signs of use and life it showed. It was my first time visiting a temple outside of North America, as I had been to Buddhist temples in Canada and the United States before. However, this one, as one would expect, was very different.

I found it fascinating how well attending this temple was in comparison to places of worship back home in Canada. The temple and its courtyard had a consistent trickle of people leaving offerings. Everywhere I went, there were people! I thought this was very interesting as I understood that China had gone through a strong anti-religion phase under Mao.

From my own observations living in Canada, I feel that people have largely abandoned organized religion, while holding onto some traditions and absorbing other culture’s spirituality as a form of leisure and person work (yoga, meditation, etc). Thus, I was intrigued to see such devotion at a religious building in a modern city like Dongguan.

As I was unaware of the customs within this setting and I tried to be as respectful as possible: being quiet, not taking photos of the main area of worship, and not taking when people were in my field of view. The temple was both familiar and foreign. It was an interesting sensation being there.

Dongguan has recently been in the news regarding plans to finally complete many ‘ghost’ buildings which were started during the realty boom in the 1990s but never finished. Did you get any sense of this side of the city when you were there?

As a one-time visitor, how would you describe Dongguan as a whole to people back home, and why should anyone take the time to visit when they have perhaps prioritised other cities in the region such as Shenzhen and Guangzhou above the likes of Dongguan?

People were surprised when I said I was going to Dongguan, but there’s actually a lot to do there! There’s the gardens, the parks, the temple, shops — lots to interest a traveler like me for multiple days.

Dongguan is not a tourist trap yet, which makes it appealing to someone like me who doesn’t like crowds, aggressive merchants, and to feel like they have the words ‘TOURIST!’ in big, bold letters across their forehead. Dongguan was less crowded and quieter than other cities I went to. I feel like I got a good concept of ‘everyday urban life’ there (although this was expat focused).

As an expert in design, what strikes you as some of the biggest differences between traditional Chinese designs as you see at the temple in Dongguan, and the traditional designs in the West? Clearly the architects of China’s past thought very differently to those in Europe and America… Have you given any thought to why that might be?

I am not the best person to answer this question given my very recent introduction to West vs. East architecture, but to speculate on an answer, I’d say it has a lot to do with difference in spirituality, demonstration of power, and how that affects aesthetics.

Feng shui plays an important part in interior and exterior design of a home in China, while the West has never had (to my knowledge) any guiding principles used to that extent over so many years.

I feel that architecture in the West is largely used to express power, money through aesthetic taste, and a largely masculine feel about them (columns, boxy, heavy) while traditional Chinese architecture also expresses power, money, etc. but with the added feminine side (curves, light, etc.) of spirituality and nature.

Churches and cathedrals in the West express spirituality too, with stain glass windows to let in light, towering peaks that reach the heavens, etc., but I feel they work against nature rather than embrace elements of it. In summary, the East and West’s relation to nature and gender is shown in its ancient architecture.

Moving forward, Chinese architecture of the past and present have their similarities and their differences, depending on what type of building and where it is. If I’m going to be general, I’d say that the contemporary architecture in China lacks character, but that is largely the case across the world due to tight budgets and changing aesthetics.

On a side note, I was very pleased when I wondered down a residential alley to find rows of old houses to photograph. A man asked what we were doing and when we said that we thought they were beautiful, he laughed. “They’re not beautiful! They’re horrible!”

To someone like myself who had never seen or lived in anything like this before, the buildings were alluring and visually exciting, but to a resident they were dark, unsanitary abominations. I’m sure if I lived there, I would think the same. I can understand the appeal of contemporary buildings when one compares the living conditions of an old building to a new one.

On her second photography-based blog, The Black Beret, Nell introduces the photos:

During my two weeks in China, I surprisingly only visited one temple. The one I visited happened to be the city of Dongguan. It consisted of many buildings within a walled enclosure in a park. I found [the old] section the most interesting from a structural and aesthetic point of view — wish I knew more about it!

Throughout my travels through China, I found myself mesmerized by the residential doorways I passed. It is partly due to the colourful signs, but it is more than that. Doors separate the private from the public, the seen, the unseen, and one way of life to another. Here are photos I took of the doorways and living quarters of a temple in Dongguan, China.

On behalf of the team at The Nanfang, I thank Nell for sharing her thoughts and impressions on Dongguan and its temples. 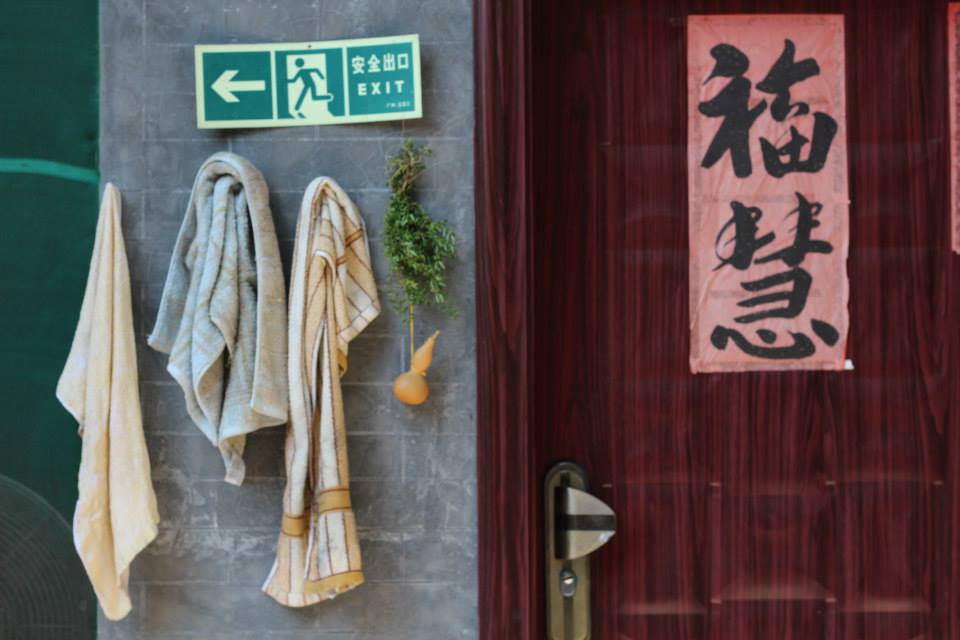 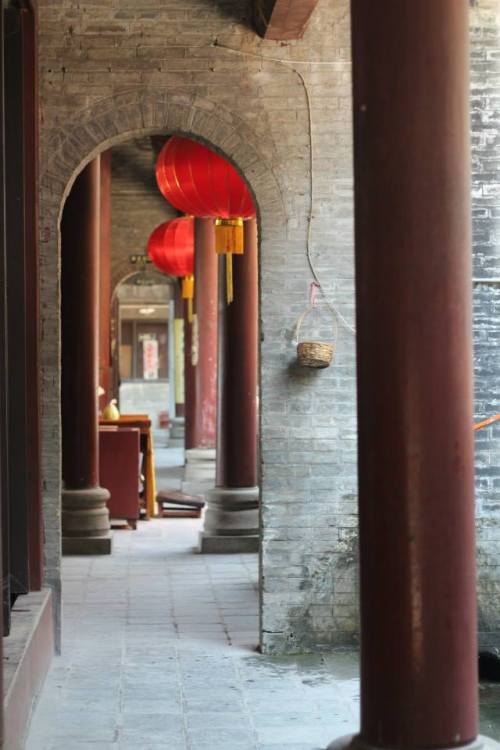 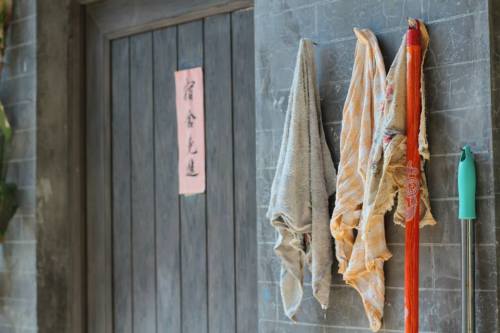 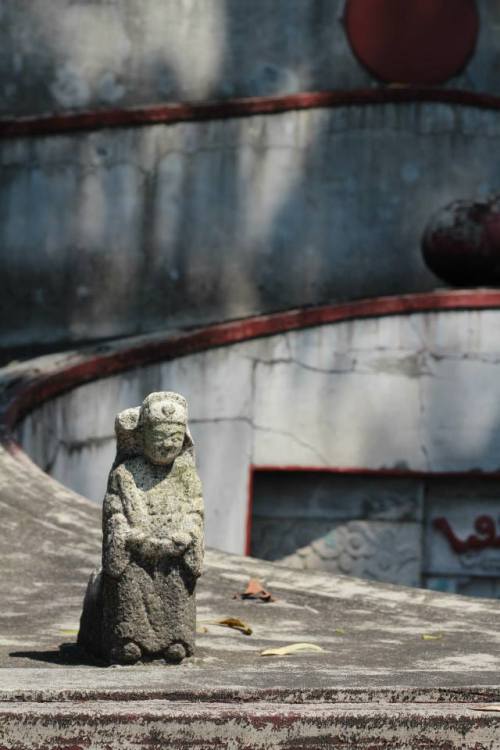 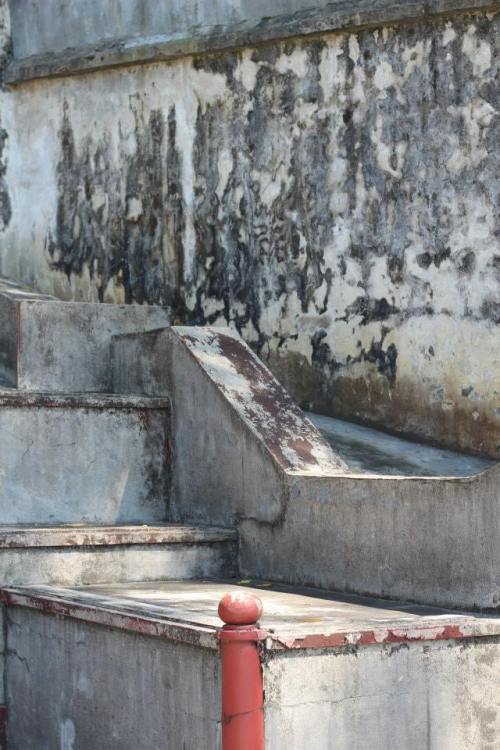 Check Out These Pics of the New Shenzhen Museum of Design

China’s First Museum of Design To Open in Shenzhen