Over a dozen police were sent to resolve a brawl that took place in Guangzhou University City in the small hours of Wednesday May 8, QQ News reports. 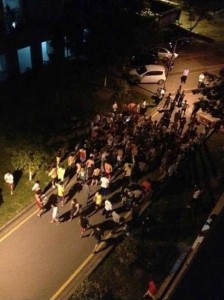 An image of the brawl taken by a witness

Eyewitnesses claim a drunken student from Xinghai went to a dormitory of South China Normal University and started shouting and swearing at passers by. After he squared up to a student from the university, fists started flying.

Things rapidly got out of hand and by the time police arrived, over 100 students were involved in the brawl.

Police managed to disperse the brawlers and no serious injuries were reported.

Killings on campus have been sparking soul searching in China recently, but this doesn’t appear to be anything more than a large-scale version of the types of drunken brawl that happen outside college dorm buildings everywhere.

Round-up: Images of chaos caused on local campuses by storms and floods