After a documentary broadcast last month sparked increased interest in the poet, novelist and essayist Gu Cheng (1956-1993), letters he wrote when he was young were released to the media in Zhuhai on Jan. 25, Chinanews reports.

The author and critic Li Geng, who is 7 years Gu Cheng’s junior, released the letters sent to him between 1979 and 1981 when Li was still a teenager. They reveal Gu Cheng to have been full of self doubt but also to have a more genial personality than he is remembered for.

Even by the standards of poets who died young, Gu Cheng had an extraordinary life. The son of army poet Gu Gong, his family were sent off to Shandong to work on a pig farm during the Cultural Revolution. Gu Cheng claimed to have learnt poetry directly from nature and later became part of a group called the “misty” (朦胧) poets that were prominent in the late twentieth century. 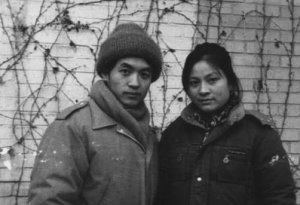 On August 10, 1993, while employed as a Chinese lecturer at the University of Auckland, Gu Cheng attacked his wife Xie Ye with an axe before hanging himself. She died on the way to hospital.

Gu Cheng’s best known poem is the two-line piece “A Generation” which goes: “The dark night has given me dark eyes. But I use them to look for light.” This is thought to have encapsulated the experience of the generation that was young during the Cultural Revolution. It also forms the chorus of the song “Dark Eyes” by Shenzhen-based alternative singer Liang Ying.

A typical paragraph in the newly released letters goes: “You and I are quite alike, but in some ways are not alike. You seem to have more life in you than I do.” He later writes: “I hope to see your poetry, but I can’t give a critique. I don’t understand theory, or standards. I only understand emotions.” Gu Cheng then urges Li to please critique his work. They are also full of interesting tidbits such as the admission by Gu Cheng that he saw fellow misty poet Shu Ting as his soul mate and “like an older sister”.

Li thinks that Gu Cheng was a clinical depressive but lived in a society that was not yet enlightened about the issue. He also shared an important insight with a reporter from Chinanews. “In a short time, poetry has ceased to be part of real life in Chinese society. Pretty much nobody makes a living from poetry anymore. In a society that can’t produce great poets, poetry cannot go on producing a wealth of quality.”

A picture of Liang Ying from her Douban page

The owner of a local expat bar recently told this author that he would love to host live original music to encourage grassroots artists, but the market demand simply isn’t there. But some grassroots musicians persevere anyway. One of them is locally born post-80s girl Liang Ying.

Liang Ying kindly took the time to talk to The Nanfang last week about the new album she recorded with fellow alternative musician, Xiao Du, as well as talk about the experience of playing her esoteric music in front of Shenzhen audiences. The title of the album, which roughly translates as “It Is Unbearable to Meet As Well As to Part,” comes from a Tang Dynasty poem by Li Shangyin.

This poem forms the lyric of the album’s opening track, “Untitled.” Lasting almost six minutes and involving harmonies and intricate acoustic guitar playing, it is unlikely to be heard blasting out of any KTV rooms in the near future.

But after performing their songs at small venues around the country, the duo have built up a small following of devoted fans.

Although she has collaborated with foreigners, Liang insists that she got interested in alternative music at a very early age without their influence.

Although many of her lyrics come from ancient poems and 20th century “misty” poets such as Gu Cheng, some are more accessible and even conventional, such as those of “Come,” the third song on the album.

Liang and several fellow local grassroots musicians did briefly enjoy a mainstream audience in 2011 when they were invited to perform at Shenzhen Concert Hall tracks from their collaborative album “The Sound of Shenzhen.”

Although the artists enjoyed playing for an audience that was more attentive than what they are used to getting in bars, in order to get the gig, they had to remove the hard edges from their material. Songs that got the nod included “Life” by Wu Qiang, an ode to the singer’s toddler son.

When asked by The Nanfang whether Shenzhen would one day have an alternative music scene to rival that of Beijing, Liang said she thinks in 20 years Shenzhen will have more than it does now, but there are too many obstacles to achieving the goal of equalling Beijing.

Liang Ying and Xiao Du sell copies of their album for 50 yuan whenever they perform. Locations at which they frequently perform include C Union and Old Heaven Book Store in Nanshan District, and Brown Sugar Jar in Futian District.

Updated: Smiling Knives light it up at Music Base in Shenzhen, we give a full review

Gary Hurlstone of The Smiling Knives.

Novelist Jack Kerouac once famously said that the only people for him were the ones who never said a commonplace thing. Local band “The Smiling Knives”, fronted by another novelist Gary Hurlstone (who we once interviewed), are Jack Kerouac’s kind of guys.

The band kicked off its show at The Music Base in Shenzhen’s Nanshan District Nov. 17 with the song ‘Saturday’ which contains the line “Walk between the raindrops that fall in our lives.” This is one of many intriguing lines in Hurlstone’s sometimes unfathomable lyrics.

The opener was probably the quietest song of the evening as drummer Liang Ying and bass player Xiao Du were late for the show due to other engagements. After they arrived, the band shifted up the gears for the title track of their 2012 album “The Zen Kick.”

The new material that the band debuted augurs well for their next album but the stand-out track of the evening was “Lucky Man,” a song that utilises the band’s ability to make refreshingly unpredictable changes of key and time signature.

The song’s lyrics, as Hurlstone explained before playing, were inspired by his experience of being mugged in Hong Kong. This is interesting, but many members of the audience will not have understood his English. When the band play for a big crowd, Hurlstone’s wife comes on stage to translate, but the performance took place before 10 p.m. so the audience was probably too small for this to be necessary.

Anyway, people don’t come to see The Smiling Knives to hear talk, they come for the outstanding musicianship. Bass player Xiao Du from Inner Mongolia and drummer Liang Ying from Shenzhen are both highly capable and versatile musicians, but the show was quietly stolen by Mexican violinist Rael Solis. On two occasions, this reviewer thought Gary was doing something fancy with the effects pedal of his guitar, then looked up and saw Solis doing things I didn’t know a violin could do.

There are some minor quibbles. The brilliant backing vocals of Liang were not as audible as they could have been. There are long pauses before the penultimate and final songs as Hurlstone changes the tuning on his guitar (this could be partly solved by shifting the song “Freeze Frame” to last). This reviewer also would have liked to have heard more new material.

But the biggest criticism is that the show ended too soon as the in-demand band had to play at C-Union in Nanshan District’s OCT.

There’s always next time. You can listen to the band’s stuff on the band’s web page here.