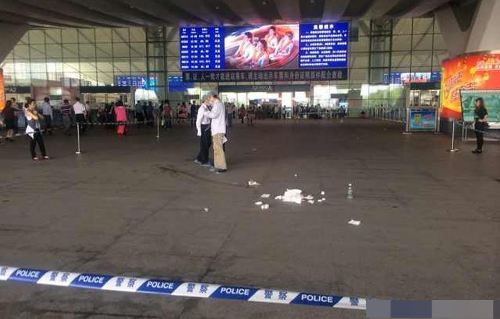 “Knife attack at train station” isn’t something you’d think you’d be hearing again so soon especially with a public frayed with anxiety, and yet it did so recently at Shenzhen North Railway Station.

At around 8am on April 13, a woman walking into Entrance A of Shenzhen North Railway Station was stabbed in the abdomen by a man wielding a knife, who would later turn the blade upon himself, Nandu reported. Named Zhang, the man was despondent that the victim, his wife, was transferring to Shanghai to work for two months, said a source belonging to the woman’s family. The woman had been working at Foxconn and was the sole breadwinner for the family that includes their seven year-old son.

In the wake of the deadly knife attacks in Kunming that killed 33 people, we’ve seen a focus on strengthening homeland security in China. The beginning of April saw an increased police presence at Yinhe Park that was described as “the most heavily-guarded Qingming Festival in history. Furthermore, public security in nearby Guangzhou is planned to be strengthened next month with increased patrols by armed police.

However, one the heroes that would save the victim from further injury, Ma Xingwang, 40, described a situation that was not reflective of this renewed vigor for security:

After he got up, he picked up his knife to chase after me. We ran several circles around the plaza. As he wasn’t able to catch me, he finally stopped and just glared at me, so I just glared back at him.

That sounds pretty absurd, but let’s add the additional details of this story as told by Ma in successive order by which they are “mind-blowing”:

1. This occurred at Shenzhen North Railway Station during rush hour
2. The plaza is packed full of people
3. Not one person helped Ma during this time
4. Station security guards stood to the side and watched as they arrived *
5. The entire attack lasted for ten minutes before Ma’s brother was able to trip the attacker from behind, and finally subdue him

Yes, ten minutes. Ten minutes. There was no police response or help from the dozens of people watching for ten whole minutes. Besides missing his train, Ma and his brother could have done several other things for ten minutes besides being chased by a violent attacker armed with a knife: boil two eggs, have a quick nap, order their meal from KFC with a line of ten people waiting behind them, anything at all.

If we are critical at the inaction of others, it remains that bystanders affect the ultimate outcome: they can all attest to the heroism of the Ma brothers because they watched it all happen. 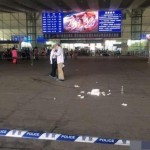 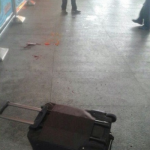 A Brazilian man was beaten in Dongguan for trying to prevent a thief from stealing a woman’s handbag on May 5, according to South China Television.

A Dongguan resident identified as Miss Zhu was carrying her handbag as she crossed the road at 7:30 in the evening when an assailant approached her from behind and attempted to steal it. The Brazilian, identified as Mozen, put his umbrella between the man and the handbag to prevent the robbery, and he was quickly set upon by three men with sticks and belts.

Miss Zhu turned around and saw the foreigner being beaten and it was explained to her that Mozen had helped prevent her bag from being stolen. According to a passerby named Mr. Tang, 20 people watched the beating take place without intervening.

The men continued to beat Mozen until his head was bleeding severely and then fled. Miss Zhu and Mr Tang then approached Mozen, asking if they could help. Together they took him to hospital.

Chinese netizens have been quick to condemn the passersby for failing to intervene. One Sina Weibo user with the name of Ping Bei exclaimed, “these people are an embarrassment to China.” Another commenter by the name of Dream1Hunsha said, “I just hope China gets exterminated soon.”

Non-intervention has become a hot topic in China since October last year when 2 year-old Wang Yue was left for dead by passersby after being run over by two trucks. Tentative steps have been made to encourage Good Samaritans, such as when a Uruguayan woman was awarded 3000 yuan (US$476) for rescuing a drowning woman in Hangzhou.