Orphans at the Jieyang monastery

After seven children died in an orphanage fire in Henan Province earlier this month, six officials were suspended and questions were raised about the shortage of government run facilities for abandoned children.

Yuan Lihai, who ran the illegal orphanage, received much support from netizens for taking it upon herself to care for the children. In reaction, provincial governments are carrying out inspections to make sure that local governments are funding orphanages.

Last week, a local government in Guangdong Province came under scrutiny after local officials asked to “borrow” some orphans from a local monastery ahead of an inspection from the provincial government, according to Southern Metropolis Daily. This was discovered after a video of the conversation was leaked online, showing that the officials were not helping the orphans but merely trying to make themselves look good.

When confronted about this, the official explained that he meant “take” instead of “borrow,” as the two words sound similar in Mandarin. But according to an excellent opinion piece in today’s Shenzhen Daily which was written by a Jieyang native, this is not possible in the local dialect. 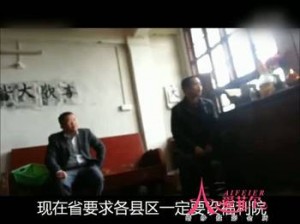 Officials asking to ‘borrow’ the orphans.

This is not the first case in modern Chinese history of a local government attempting to paint a rosy picture for provincial authorities. It is also not the first controversy involving an official in Jieyang. Late last year, the former party chief of Jieyang, Chen Hongping, was investigated as part of the province’s anti-corruption drive.

The  opinion piece in the Shenzhen Daily draws a connection between corruption at the top and failure to look after society’s most vulnerable people.

Lacking funds is no excuse for the government. China’s fiscal revenue has recorded two-digit growth annually in the past 10 years. And according to Wang Xixin, a researcher at the General Office of the Standing Committee of the National People’s Congress, Chinese officials each year spend at least 900 billion yuan on wining and dining, overseas trips and official vehicles. If a fraction of such expenditure is saved, the country’s orphans, who numbered 712,000 in 2010, would have decent homes to live in.

Let’s hope the people at the top are serious about this anti-corruption drive.