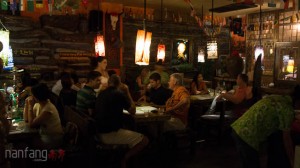 Helen’s will open two outlets in Shenzhen by the end of the year.

The bar scene in the Pearl River Delta is growing fast.  It seems to have hit a wave of expansion, with some bars moving into entirely new cities.

Guangzhou seems to be ground zero for all the action.  The Brew now has three locations, after the grand opening of their Yuexiu location on Friday night.  The Tavern has two locations, and the Paddy Field opened their second location earlier this year.

McCawley’s – just this year – opened a new location at the Peninsula in Shenzhen and expanded into Guangzhou in a joint-venture with Hong Kong’s Delaney’s.  McCawley’s isn’t done yet though, as sources tell The Nanfang the popular Shenzhen pub chain has already locked up a new location in Dongguan.

Dongguan, itself, now has a whole bunch of more bar options.  The Nanfang visited Murray’s on Saturday night, which is a classy Irish pub with a relaxed feel.  Helen’s, directly across the street, is the 18th outlet of the popular student-themed bar but the first in Guangdong.  It plans to open two new outlets in Shenzhen before the end of the year, bringing dirt cheap draft beer and pizzas to the city.  The Office makes up the triumvirate in an area which is becoming known as The Crossroads, as all three bars are steps away from each other.

The rapid expansion of laowai bars and restaurants in Guangdong raises a few eyebrows considering the economy is supposedly slowing and manufacturing – while still strong – is a few years past its heyday.

Your correspondent also spent many years living in Beijing, a city with its own iconic establishments.  What’s interesting to note is there seemed to be almost zero desire among these bars and restaurants to expand to second locations, nevermind expand to other cities.  The entrepreneurial fire burns hot in southern China, and maybe laowai are picking up on the shrewd business skills of the Cantonese.