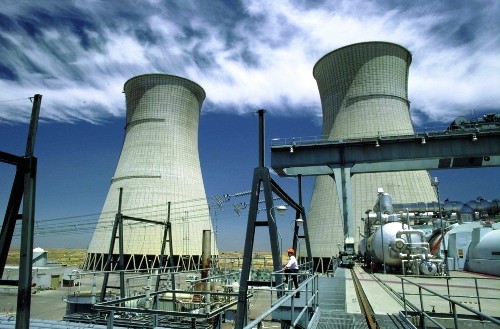 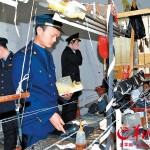 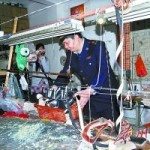 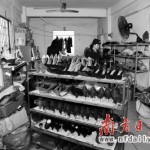 The crackdown comes as a follow-up to a story covered by TheNanfang last week with news from the New Express newspaper about 30 shoemakers in Liwan left with serious nerve damage—in addition to several deaths—after longterm workplace exposure to toxic glue fumes.

“Wherever there’s money,” said a Mr. Deng, when asked why he chose to remain working in an unventilated, highly toxic area, “that’s where we’ll be. We have no other choice, we must earn money to live.”

In related news, Southern Daily also reported last week that workers in Shenzhen at more than 11,000 enterprises involving electronics manufacturing, printing, shoemaking, hardware electroplating, quarrying and plastic toy, furniture and battery manufacturing) are at risk of occupational diseases. In addition, according to the Shenzhen health authorities, at least 336,000 workers in the city are in regular contact, on the job, with toxic substances.

Over the past few months, more than 30 workers in Guangzhou have been sent to hospital with a similar set of symptoms: a dull look in the eyes, incontinent, shaky hands and memory loss. Four men have died from what has been diagnosed in each of these cases as dichloroethane poisoning.

What’s poisoning these workers, both men and women, all of whom work in making shoes or leather cases, is suspected to be toxins contained in industrial strength glue used in their factories. Yesterday, the Guangzhou No. 12 People’s Hospital, which specializes in treatment and prevention of occupational illnesses, began the formal process of identifying the illnesses affecting this group of patients.

Liu Yimin, deputy warden of the hospital, says that the patients all suffer from damage to the central nervous system.

New Express was able to interview Fan Xiuwen, a worker in a shoe factory in Baiyun district fortunate enough to have gone to hospital earlier for a routine body check, before chemicals from the toxic glue began eroding his mind—the same glue, he came to realize, which he was using daily to paint onto shoes.

Factory worker Tan Qiuyan, among those poisoned, being fed by her mother

Many other of those affected have not been as lucky. On the 8th floor of the No. 12 hospital, 27 factory workers are currently receiving treatment for suspected poisoning from their daily exposure to the glue. After those who succumbed to the poison, the most serious currently is a man lapsing in and out of a coma; the newspaper writes that at times when the man is conscious, his situation has deteriorated to the point where he can’t give the answer of one plus two.

Treatment for the more than 30 workers has already cost around 1 mln RMB. Media have reported that while their employers should be covering medical costs for treatment of workplace injuries such as this, 70% of the accumulated costs still remain unpaid.

A reporter with Beijing Morning Post visited the shoe factory of one of those poisoned in Guangzhou’s Liwan district, finding that the “factory” is actually an illegal workshop, no operating license or ventilation, situated in an old residential area.

The owner of the factory, Liu, told the newspaper that he has paid more than 10,000 RMB to cover his employee’s medical expenses. New Express writes that given the size of his workshop, it’s quite evident that 10,000 RMB is pretty much all he can afford.

The same reporter went to visit another leather factory with poisoned employees, finding only that the factory was previously closed down.

Police have arrested six suspects with the charges of manufacturing defective glue and the illegal storage of dangerous chemicals.