The facts, first: China is an atheist state as governed by Communist Party members who are not officially not permitted to have any religious beliefs. Religions that are practiced in China are done so without the support or endorsement of the CCP. While China is home to many people of various spiritual beliefs, it’s usually something that is done privately. Religion is something that is not usually discussed in television, film or on Weibo.

And yet, this weekend saw this post from none other than the Communist Party’s official mouthpiece, the People’s Daily:

The Weibo account of the People’s Daily believes these Western stories are essential reading for all of its subscribers. Among the items are four Bible stories from the Old Testament.

So, without further ado, see if your Western knowledge compares to a People’s Daily reader! The following are translations of the People’s Daily post by The Nanfang: 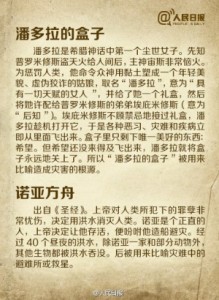 Originates from the “Holy Bible”. The Lord was very sad from the sins that mankind had committed, and so decided to use a flood to anhilitate mankind. Noah was a righteous man. The Lord decided to let him live, and so commanded him to build a boat in order to escape the disaster. After forty nights of flooding, all life (on Earth) was engulfed by the flood except for Noah and his family as well as some of the animals. This story is one of savior during a disaster. 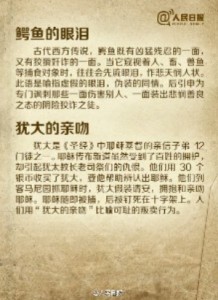 The Kiss of Judas

Judas was one of Jesus Christ’s 12 trusted disciples as told in the Bible. Even though Jesus had won the popular support of the people after giving his gospel, He had become the target of hatred from the old priests of the Hebrew religion. They used 30 coins to buy Judas’ loyalty, and needed his help to positively identify Jesus. When they arrived at the Garden of Gethsemane to capture Jesus, Judas pretended to greet Jesus by embracing and kissing him. Jesus was then arrested, and was later crucified on the cross. People use “the kiss of Judas” as a way to describe shameful acts of betrayal. 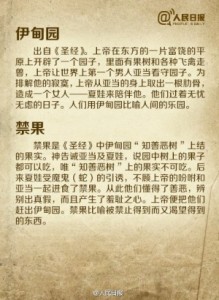 The Garden of Eden

Originates from the Holy Bible. The Lord made a garden on a bountiful plain in the east. In this garden were fruit trees and every type of bird and animal. The Lord made the first man, Adam, act as a protector to this garden. In order to alleviate his loneliness, the Lord took a rib from Adam’s body in order to create a companion for him: Eve, the first woman. The two lived a carefree life without worry. People now use the Garden of Eden to describe a paradise for humanity. 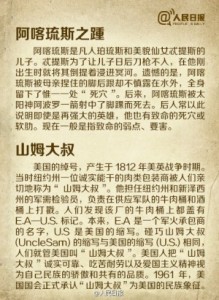 The nickname of the USA was created in 1812 during the war between the US and England. At that time, an honest and capable meat packer businessman in New York was warmly regarded as “Uncle Sam” by everyone. This man served as the mandatory food inspector for the armies in New York and New Jersey, and would place a seal upon every barrel of meat and wine received by the armies. People discovered that every barrel of meat would have the markings “E.A.–U.S.“ on it. E.A. was the name of a military fire contractor, while U.S. is an acronym of the United States (of America). Coincidentally, “Uncle Sam” and “United States” share the same contraction, and so people started referring to the United States as “Uncle Sam”. US citizens use Uncle Sam as as way to personify the honesty, reliability, and durability that epitomizes the patriotism that the American people are so proud of. In 1961, the US Congress officially recognized “Uncle Sam” as a symbol of the American people.

The lessons have received mixed feedback from netizens. Some people welcomed the chance to learn more about foreign cultures, while others were suspicious and questioned the need to learn these “must-learn” Western stories:

小小菜比咨询师：
[laugh.emo] I have heard the story of Uncle Sam from a teacher who told it to us. The teacher was a big boy that loved to joke around. At the time I thought he was still joking. Afterwards, I still love all that kidding around, and didn’t think that it was something real!

佘俊臣的微博:
With these, I can become like a learned scholar!

屋脊精灵：
Why must we know these?

ONION的愛情：
Increase my position (by learning these)!

后期修士：
Would I die if I didn’t know these?

Perhaps any suspicions of the west’s cultural infiltration through Bible stories can be dispelled by the support of the Global Times, which also thought the idea of learning Bible stories was “essential” and important enough to share with its Weibo subscribers as well: