Did you know that 87% of Chinese college students find it embarrassing to tell their fathers “I love you”? It’s true, according to Guangzhou Daily.

It’s no secret that Chinese can be emotionally reserved. Although saying “I love you” is common in English, the phrase is rarely expressed among Chinese families, Global Times reported. 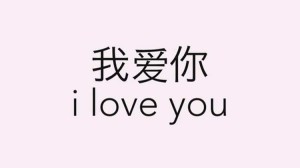 “I love you” in Chinese and English. Photo credit: New Castle China Town

In one clip taken from Anhui TV station showing college students telling their parents they love them, the parents’ responses were priceless: “What is going on?”, “Are you drunk?”, or “Are you pregnant?” One father seen in a similar video clip by Shanghai TV replied bluntly: “I am going to a meeting, so cut the crap.”

The Global Times interviewed Peking University sociologist, Xia Xueluan, who said Chinese parents are different from their American counterparts and are not used to hearing the phrase from their children. Instead of expressing positive emotions, they are more prone to express negative language when educating children, Xia added.

At the end of the day, 98% of respondents will use Weibo or online forums to send their love to their fathers, which will probably be retweeted or seen by hundreds or thousands of people; but, not their fathers.