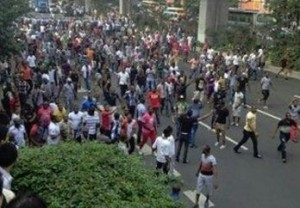 The Chinese interwebs have lit up this evening over a large-scale protest this afternoon in Guangzhou’s sketchy Sanyuanli District.

It’s very much a “he said, she said” situation at the moment, so we’re trying to piece together what happened.  This much we do know: an African man died while in police custody in Guangzhou yesterday, and foreigners took to the streets to protest today.

According to statements on Sina Weibo, a foreign passenger got into an altercation with an electric bike driver over his fare yesterday.  He was apparently badly beaten by a group of Chinese people before he died later.  However, others say that the man was being extremely disorderly.

It’s hard to know exactly what happened, but the truth probably lies somewhere in between.  For its part, the Guangzhou Public Security Bureau published a statement on its website this evening saying a man was apprehended by police yesterday.  That man “passed out” and was unable to be resuscitated despite the efforts of its rescue team.

Whatever happened, many in the African community in Guangzhou are upset about it.  Crowds gathered around Gongyuan West Road this afternoon to protest, disrupting traffic near the Sanyuanli Police Station.  The police called it a protest, but witnesses say the protesters had gone as far as setting fire to a police car.

The Guangzhou Police has called on all foreignerers in China to obey Chinese law, don’t  harm the public interest or disturb the social order of Chinese society.

We’ll update if we find out more.

Thanks to @MissXQ for the tip!

There is also a full update in a new story posted here.