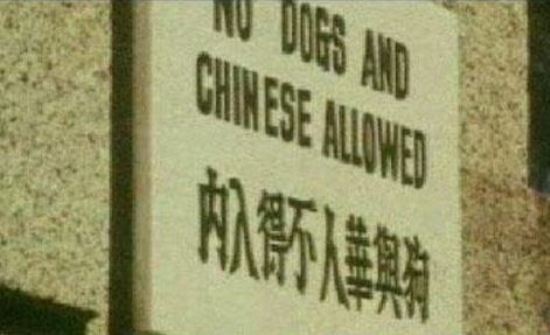 The infamous sign from “Fist of Fury” (1972) moments before Bruce Lee kicked it in half.

The days of Chinese people being discriminated against in their own country were thought to be in the distant past, but one Beijing shop has revived the painful memories. A shop near Yabao Road in Beijing’s Chaoyang District has decided to stop serving Chinese customers, and makes its position clear with a sign hanging out front that reads “No Chinese Allowed (staff excepted)”.

Store staff say the shop only engages in foreign trade, so it will only accept foreign customers. The decision to ban Chinese people came shortly after a foreign customer had his wallet stolen by a Chinese person in the store. The foreigner apparently accused the store of conspiring with the thief and wanted RMB 5,000 in compensation. Furthermore, staff said they were continually treated poorly by Chinese customers who tried on clothes but didn’t buy anything.

The store felt it had no choice but to stop serving Chinese people. As one staff member said:

We don’t want to put up such a sign and make others think that we don’t respect ourselves, but there are some Chinese customers who are simply too much to handle.