Guangdong a Hotbed of Guns in China

From the beginning of the year until May 20, Guangdong seized 805 illegal guns and 7,739,300 kilos of gun powder, He Guangping, deputy head of the Guangdong Police Department said in a press briefing on Thursday as the province steps up efforts to crack down on violent crimes following a spate of knife attacks in train stations and explosions across the country. 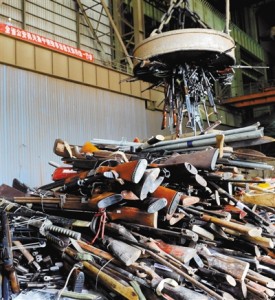 A total of 232 people suspected of selling guns online have been arrested, China News reported. In addition, 9,130 detonators and 316,000 gun replicas were seized in the province. The report did not specify if the weapons were intended for use with domestic criminal gangs or for export. Private ownership of guns is banned in China, and gun-related crimes in the country are relatively rare.

The police said 338 gun-related cases were solved during this period, but also that crimes related to illegal gun use were on the rise in the province. For example, 48 cases involving illegal manufacturing, selling and trading of guns and gun powder were busted in Guangdong last year, a 23% increase over the year before, the report said. And some of the criminal gangs involved with gun-related crimes were also found selling drugs and committing robberies.

The City of Lufeng, notorious for gun use, was responsible for 90 gun-related crimes in 2013, a total of 7.4% of all gun crimes in Guangdong. A crime-ridden city in Guangdong, Lufeng is also notorious for drugs. Local drug manufacturers were seen armed with guns such as AK-47′s in one of its villages, Boshe, during a police drug raid in January this year.

The Guangdong Police Department said it will launch a clamp-down on gun-related crimes during the month of June.