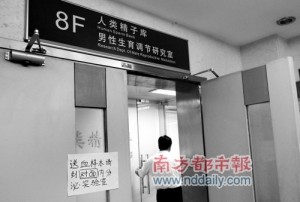 Attention young virile men: stop what you’re doing and get to a sperm bank. According to a report in the Southern Metropolis Daily, sperm banks in Guangdong province, Shan’Xi, and Zhe Jiang are facing severe donor shortages.

There are currently eleven sperm banks throughout China, only one of which is located in Guangdong Province. And while the Guangdong bank has approximately 20 thousand samples, it has to accommodate the needs of ten reproduction clinics scattered throughout the area. Needless to say, in a province with a population of over 100 million, 20 thousand samples doesn’t exactly cut it. In fact, according to the Reproduction & Birth Control Center of Guangdong, infertile couples can expect waitlists of up to a year.

According to Tang Lixin, a family planning specialist at the Guangdong sperm bank, the main issue isn’t so much quantity, but rather the quality of sperm. Over a ten month period, samples are screened for environmental pollution, chemical additives and pesticide residue, all of which compromise the sperm’s reproductive capacity. While the Guangdong sperm bank receives a few hundred samples per month, only 30% pass the screening.

If that weren’t enough bad news for couples struggling to conceive, the Ministry of Health isn’t exactly helping matters. Currently a single donor can only provide samples for a maximum of five women, while in European countries such as Denmark, the ratio is as high as twenty women to every donor.

Tang argues that if China is to seriously address the sperm shortage, the ratio of donors to women needs to change.  He also recommends raising the sample fee. In Guangdong, women and couples pay a fee of 3000RMB per sample, while in provinces such as Jiangsu it’s as high as 5000RMB.

[Updated - Tuesday: 23:30pm] Batten down the hatches for Vicente!