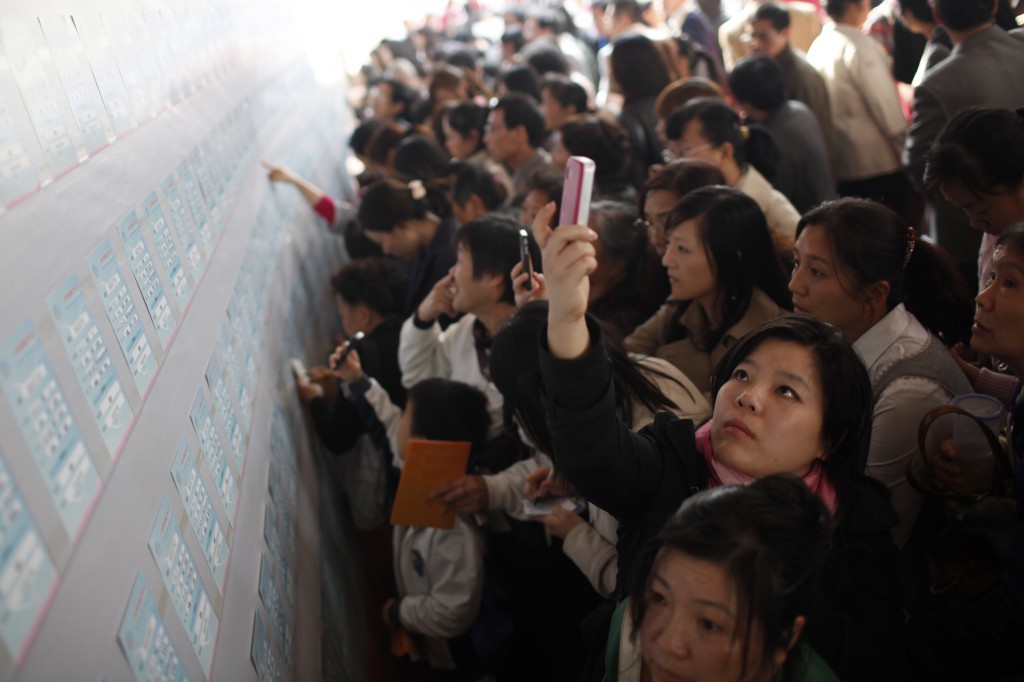 Women browsing single men’s information displayed on a board in a dating event in Shanghai.

While China has a lopsided sex ratio of 1,176 men for every 1,000 women, an imbalance that could leave 24 million men without a wife by 2020, the country’s special administrative region of Hong Kong is having an equally confounding problem but in reverse: a surplus of unmarried women, the result of the city’s worst gender imbalance recorded in history according to the latest official government statistics.

According to Xinhua, there are two factors behind the problem. One is the influx of mainland women who generally hold a single-entry Hong Kong visa. The other is the mass of foreign domestic workers in Hong Kong, mostly women from Philippines and Indonesia. The population of domestic helpers in Hong Kong is estimated at more than 300,000, wrote The Diplomat.

Meanwhile, the pool of unmarried Hong Kong women aged 25 or above, or the so-called “leftover women”, is also growing. In the city’s central and western district, for instance, the number of unmarried women account for 33% of the district’s total population. In Shatin district alone, there are more than 90,000 unmarried women, according to the Xinhua report, citing official figures.

Squeezed by the worsening gender imbalance in favour of men in the city, Hong Kong women are looking to the fuerdai, the second generation of rich, on the mainland for future partners.

Dating consulting agency personnel Ou Huifang said Hong Kong’s surplus women are “perfect matches” for the mainland’s surplus men. Mainland men in general favor Hong Kong, which means they will have an additional sense of accomplishment if they can marry a Hong Kong woman, Ou continued.

But so far, the cross-border dating experiences have been disappointing for Hong Kong women as they are far too independent to fit the traditional model for mainland men, which involves seeking a “virtuous wife and caring mother”, according to another Hong Kong-based dating agency. For now, most Hong Kong women will continue to be unmarried and lonely by choice, or increasingly, by default.