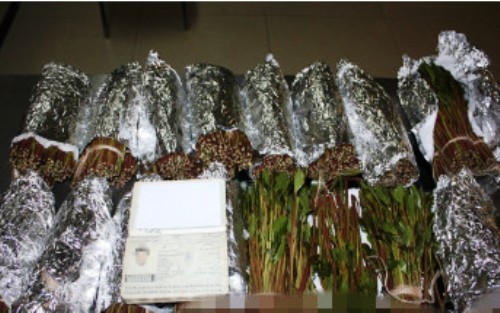 Guangzhou customs recently announced that they have seized 2,069 kg of smuggled drugs since October of last year. As impressive as that is, it pales in comparison to the recent one-day haul made by Huangpu custom agents who say they have seized a shipment of khat that weighs an amazing 3,531 kg, reports the Dongguan Times.

If you’re unfamiliar with khat, which is also known by the names “Arabian Tea” or “Bushman’s Tea”, the Guangzhou police want you to be aware that this drug is equivalent to heroin and has a euphoric high that lasts for two days.

Described as relatively new to China, the emergence of khat is troubling to local law officials because the drug looks like amaranth greens when fresh, and like dried tea leaves when dried.

READ: Meet the New Drug on the Streets of Guangzhou: Khat, the “Arabian Tea”

Khat received lots of attention recently when it was reported the drug was being packaged in orange drink powder packages with cartoon images on the front.

Khat is considered a way of life for some cultures though it is considered a prohibited substance in countries like the USA and the UK. The World Health Organization does not consider khat to be seriously addictive.