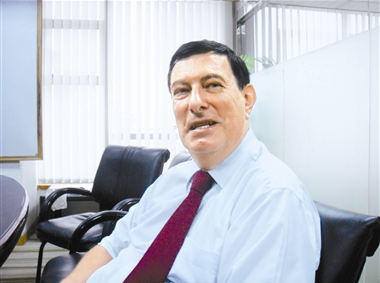 A long-term Shenzhen expat from Italy has told Shenzhen Daily that he wants to join the Communist Party of China to help protect the environment and conserve the culture.

Marco Loglio has a background in left-wing politics, having been a member of the Lombardy region political bureau of the Italian Communist Party and worked as an editor for the party’s newspaper. Currently employed as a consultant for China Hi-Tech Fund, Loglio is an admirer of the achievements of China’s ruling party but feels it could use his help with some of the problems it faces.

Pointing to the smoggy sky outside of his office in Futian’s CBD on Nov. 4, Loglio said Shenzhen is a beautiful city but should find solutions to sustainable growth.

He believes he can contribute to the city’s sustainable development by becoming a CPC member: With a CPC membership, his advocacy for conservation of nature and culture will be heard by more people. He said he has helped a company develop a streetwise electric car and has been contributing many ideas — through channels such as letters to local media and a book he wrote on cultural tourism — to the development of Dapeng Peninsula in eastern Shenzhen.

But as a foreigner, applying for CPC membership may be a herculean task. He said he would not give up his Italian citizenship, when asked if he had to first become a Chinese national in order to gain CPC membership.

“I just want to be a CPC member as a foreigner, if possible. I am and will remain to be Italian,” Loglio said.

The definitive book of recent years on how the Communist Party works is The Party by China-expert Richard McGregor.

Of the few foreigners ever to join the Communist Party of China, American Sidney Rittenberg is probably the best known. Last year the documentary The Revolutionary documented his unique life story. His memoir The Man Who Stayed Behind covers his youthful idealism in the 1940s all the way up to the late-1970s when he got out of solitary confinement for the second time and found that his socialist views had become an anachronism.