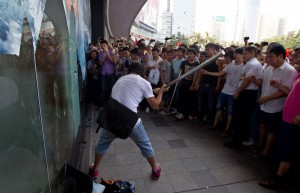 A protester smashes the window of a Japanese store in Shenzhen.

It was another weekend of simmering discontent in China over the Diaoyu/Senkaku Islands dispute, with it boiling over at times in Guangzhou and Shenzhen.  Our neck-of-the-woods was only one front in the nation-wide outburst of anger at the Japanese, with a Panasonic and Toyota plant damaged by fire in Qingdao.

It’s estimated there were protests of varying size in 85 Chinese cities on the weekend, with arguably the largest in Shenzhen.  Reuters reports police fired water cannons, pepper spray, and tear gas to subdue rowdy protesters:

Protesters attacked a Japanese department store, grabbed police shields and knocked off their helmets. One protester was seen with blood on his face. At least one policeman was hit with a flowerpot.

Another 10,000 hit the streets in Guangzhou, overturning cars and smashing the windows of Japanese businesses.  Dongguan also had a small-scale protest, while those angry with Japan in Zhuhai also demonstrated according to the South China Morning Post (behind a paywall):

In Zhuhai, demonstrators gathered in the downtown Gongbei district at about 9am. They broke through three police roadblocks and, according to Hong Kong-based RTHK, threw rocks and water bottles at Japanese cars parked on roadsides. Police were seen distributing water to the demonstrators.

Some of the worst protests happened in other Chinese cities as well, with protesters pelting the Japanese embassy in Beijing with eggs while a Japanese man had his dog killed at the hands of an angry mobs in Shanghai, according to posts on Weibo.

It’s clear the Diaoyu/Senkaku issue has become more than simply a hot-button issue, and the protests seem to be proceeding with tacit approval by the Central Government.  Some reports on Twitter indicated that buses of protesters arrived at the Japanese embassy in Beijing, indicating the event was planned, while factory workers in Zhuhai and Dongguan said they were given the day off in order to participate.

With the political instability in China at the moment, don’t expect this issue to go away anytime soon.  Let’s hope our Japanese friends and colleagues stay safe in the meantime.

Protest in Shenzhen on Sunday September 16