Welcome to the third installment of a new series on The Nanfang focused on travel in the Pearl River Delta. From time to time, our staff will be taking the various ferries, buses and trains connecting the cities in the PRD and writing full reviews with detailed information, so you know what to expect. Today is our third edition, focusing on the second rail travel alternative connecting Guangzhou with Kowloon (Hong Kong). You can read other articles in the series here.

The Guangshen (Guangzhou-Shenzhen) intercity CRH service and Hong Kong’s MTR East Rail Line provides a useful, cheaper train travelling alternative between Guangzhou and Hong Kong – or depending on where you are around the Pearl River Delta – an efficient transport link between several cities. 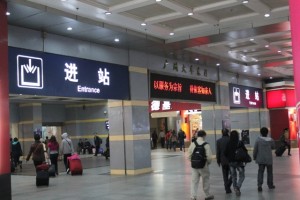 GUANGZHOU EAST RAILWAY STATION
Arriving at the station: by metro, follow the exit to East Station and the Guangshen CRH; take a taxi, you will be dropped off opposite McDonald’s if you come from the north, but south you’ll be taken round the taxi rank. The CITIC Plaza building is a brilliant pinpoint for East Station.

Inside, travellers are separated from the two main services. For the CRH, stay on the main concourse (street level), head towards the security scanners, go through, with any luggage or bags – scanned – and purchase your single ticket. Remember to hand over your passport and money when you buy at the counter. East Station is good if you’re lacking Mandarin or Cantonese-speaking skills – counter no.4 is a dedicated English-speaking desk (local travellers frequently use that counter, too).

East Station is currently undergoing a smart renovation on the main concourse – bringing it up to a modern internal aesthetic standard. No word on when it’s finished, but it’s definitely different. Unfortunately, on the outside, and architecturally speaking, it’s big, brash, grey and very Chinese. A lot of wasted space, but still affords a near skyline view in the immediate vicinity.

SHENZHEN RAILWAY STATION
Just like it’s sister CRH terminus, it’s not pretty – and a far cry from Guangzhou South Station – but still functionable, arguably one of the most important transport interchange hubs in the mainland.

The layout of the station is confusing. Foreigners need to make sure they are on the lower ground level to buy train tickets from the counter – the upper ground level is exclusively machines only – and doesn’t read passports.

Once the CRH arrives into Shenzhen Station, head down the escalator, and towards ‘east exit’ on the right hand side. Go through the barriers; turn right for a 250 meter walk – including a walk up a flight of stairs – to border control. Depending on the time of day, you will see a large volume of mainlanders waiting ever so patiently to get across the other side. Naturally, foreigners wait less to get through China/HK immigration. At HK’s border clearance, make sure you don’t get mixed up with the mainland queue, which can stretch seemingly for a mile. Show your passport to the friendly staff to jump ahead (or that’s what it seems to mainland residents) and get to the right queue – vastly smaller in comparison.

It should take no more than 20-30 minutes to cross the border. Added on with the journey time on the CRH, and the MTR, at best travelling should take only an extra 15 minutes longer than the Through Train. But that has a lot of hanging around inside the departures lounge at East Station and Hung Hom, its possible the CRH/MTR combination makes the total journey time the same, if not quicker. 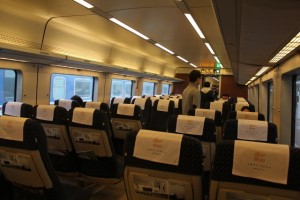 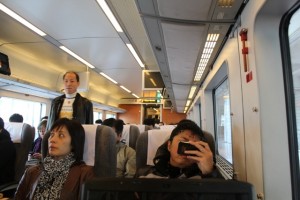 TICKET PRICES
The lowest price – compared to the Through Train for 154 yuan one-way – purchase a CRH standard class ticket for 80 yuan and 28 yuan (converted from $33.5 HKD for a standard single MTR ticket from Lo Wu to Hung Hom – with an Octopus card being 2 yuan cheaper). In total, you’ll pay 108 yuan one-way. Double both totals for a return journey and the savings on the CRH amount to 88 yuan.

THE SERVICE
From Guangzhou to Shenzhen a return journey takes on average 1:12 minutes, stopping at Shilong, Dongguan and Zhangmutou.

The turn-up-and-go service (well, almost) provides 22 services during the morning peak, and off-peak, ranges between 5 and 7 trains per hour. Also, it’s worth noting 22 services a day start from Guangzhou Station (although 18 services terminate on the return leg), it’s no match for East Station’s 96 services one-way.

Overall, the 192 CRH trains scheduled to run makes it a worthy rival to the Through Train especially since the first CRH at East Station beings at 6.13 am easily beating the 08.19 am start for a direct service. But, the Through Train’s saving face – final service to Hong Kong finishes at 21.32 pm, with the last CRH services from East Station and Shenzhen both departing at 10.40 pm. However, from Hung Hom, the Through Train ceases at 19.24 pm – no good for cross border travellers. With the last train from Shenzhen leaveing at 10.40 pm (with some leeway for late-stragglers running from border control to the platform – as The Nanfang tried and tested this method) – means the latest passengers must board the East Line train from Hung Hom to Lo Wu is by 21:36 pm.

There are almost non-existent queues for cross-border immigration late at night, but don’t take it for granted, be as light-footed as you can because you still have to buy a ticket for the CRH at Shenzhen.

But as we experienced with the last service of the day, we got to the front of the only ticket booth open, every passenger from then on, including us, was told to run to the train – as it departed in less than four minutes – go through the security scanners, and the open barriers, and onto the last service – where you then buy your ticket on-board. 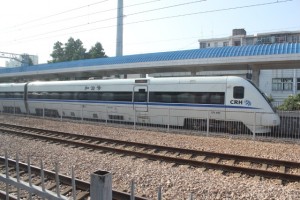 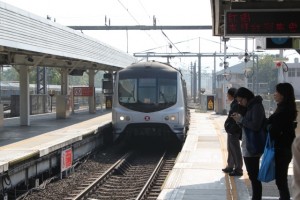 A MTR train from Hung Hom arriving at Lo Wu

THE TRAINS
On the Guangshen leg, the CRH1A is a visually stunning eight-car train set running on dedicated overhead-wired tracks separating it to the Guangzhou-Kowloon service. Only five years old, the reliability of the trains and service are one of its enduring features, ensuring it runs like clockwork, and with it brings a comfortable and impressively smooth on-board journey.

Inside the 611-seated train, there are two first-class coaches at either end of the train organised into 2+2 seating arrangements, five standard-class carriages formed of 3+2 seating and one buffet/dining car. And the well-dressed train crew are on hand to provide an at-seat and trolley service on-board, too, regardless of class.

However, it’s not unusual to find people standing in standard-class, but is luckily restricted to bums on seats in first-class or tickets are sold out.

Once you cross the border into HK, you immediately meet the MTR – and Lo Wu Station. It’s big. But can get very crowded as local residents and mainlanders intersect. It looks like organised chaos, but it works – just about coping with the strain. However, once on the platform and you are greeted by a 12-car train with one carriage designated for first-class passengers. Journey time to Hung Hom (and the return journey) is approximately 43 minutes each-way.

CONCLUSION
The CRH/MTR alternative provides competition when head-to-head with the Through Train, and a route of last resort for when you want to stay in Guangzhou or HK for a little longer.

Delays on the CRH and the MTR lines are rare, almost unheard of – and keep to time for the most part. There are numerous services shuttling up and down giving the traveller plenty of choice, and much less of a wait. Although the advantages of the Through Train speak for itself, it regularly runs late, with tight turnarounds, little slack in the timetable when delays arise and if you choose a non-Ktt train, you’ll find it a bleak, squeaky, rickety and most uncomfortable of services.

However, despite the shine of the CRH trains, the Ktt-operated double-deckers are a novelty, and a much better environment to be in – probably because there are less people on board on a typical service.

Nevertheless, the Through Train’s frequent delays – verging on unreliable, yet at best inconsistent – and the extra planning for the sparse number of trains running a day compared to the CRH service – which, too, being significantly cheaper combined with the MTR, is a better travelling alternative, with the traveller in control of his or her journey.

TIMETABLE
There wouldn’t be enough room to replecate the entire CRH timetable, so we’ve broken them down into number of trains per hour.

Hong Kong’s MTR from Lo Wu runs every 6-8 minutes throughout the day.