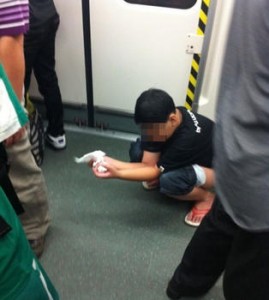 A photo of a boy squatting and emptying his bowels on line 3 of the Guangzhou subway have gone viral after being uploaded to Sina Weibo Nov.11, according to local media.

The boy was left to pull his pants down and shit in the corner while his father stood around nonchalantly.

Needless to say, Guangzhou residents expressed shock and disgust when interviewed. One said that the blame must lie with the parents, saying that children needed to be taught that when in public, they could not just do what they want.

Members of the public also lamented the lack of toilets on subways and in some subway stations.

One netizen speculated that the child must be at least 10 and should already know better. Another urged his countrymen to work harder to raise their children and improve themselves, then this kind of thing would not happen. A Sina Weibo user who is holding a baby in his profile picture said the child was “scum.”

This year, several major Chinese cities such as Shenzhen have pledged to punish “uncivilized behaviour” in an attempt to encourage people to behave with more consideration when in public. How’s that going by the way?