Pictures of a “fu’erdai,” or second-generation rich person, who lives in Shenzhen and enjoys a life of luxury that is unimaginable to the average person have gone viral, The Daily Sunshine reports. 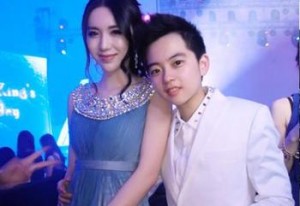 Here’s a woman who obviously appreciates his good looks and charm. This picture seems to have been taken some time before he turned 16.

The teenager enjoys luxuries including a private jet, private yacht, sports cars, a variety of luxury goods, and (of course) beautiful women. Although netizens have claimed he is the son of the boss of Evergrande Real Estate Company surnamed Shou, his identity has not yet been confirmed.

On Sina Weibo, one user said “Can this person even be considered human?”; another said it was none of the public’s business; another inquired whether the low-key stinking rich should be considered any less stinking.

China’s second-generation rich, the children of those who became rich after the country’s reform and opening up have long been derided for their sense of entitlement and their ostentatiousness. 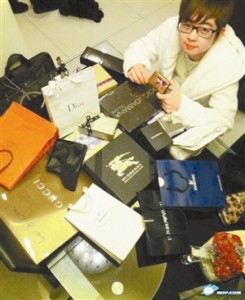 Here he is with a selection of luxury goods.

Recent Chinese New Year celebrations were the subject of a crackdown on lavish banquets as displays of wealth by businesspeople and officials have become a source of resentment in society.