When Albert Wolfe first came to China in 2005, there weren’t many resources with which a foreigner could learn Chinese and few people were blogging about it. Now Wolfe, 32, runs Laowai Chinese, one of the most respected Mandarin education blogs around. This is one of many interesting and rewarding side projects he is able to work on while employed as a teacher at Peizheng College in Guangzhou’s Huadu District. 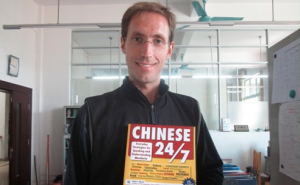 Wolfe came to Guangzhou in 2007 after spending a year in Nanchang followed by a year in Kunming. Since coming to the Pearl River Delta he has published a non-fiction book, written a novel and written several dozen songs in both English and Chinese, some of which have been played on local radio.

After taking a Bachelor’s degree in English Literature, Wolfe got his TESOL certificate and chose to come to China. “I wanted to learn Chinese. There was something alluring about the Chinese language,” he told The Nanfang. Wolfe added that he found the Chinese graduate students he knew to be very friendly and gave two main reasons why he wanted to tackle this language:

“Number one, (with Chinese) I could communicate with a huge amount of people. Number two, Chinese has a reputation for being so hard, I just wanted to see if I could do it,” said Wolfe.

When he arrived, there was one particular source of dissatisfaction – a shortage of resources with which to learn the language. “Learning to read from scratch, there were things my friends and I couldn’t find an explanation for.”

This frustration was part of the reason why he founded Laowai Chinese. “I put it out there for other people to benefit from,” Wolfe explained.

The blog has proved popular, useful and opened doors both socially and professionally for Wolfe. He has taught beginner Chinese classes for foreign teachers at his college which employs 65 (yes, 65!) foreign teachers.

Plus, Wolfe’s first book Chinese 24/7: Everyday Strategies for Speaking and Learning Mandarin, published in 2009, was made possible by the blog. Just a few months after he founded the blog at the beginning of his second year in China, a publisher approached him asking him to write the book.

Writing books and songs for publication

This was not to be Wolfe’s last book. Writing has inadvertently become a big part of his China experience. “I never thought I’d be a writer. I didn’t come to China with that in mind, just something I got into as a result of being here,” he told The Nanfang.

After Chinese 24/7 was published by Stone Bridge Press, Wolfe joined a writer’s group with two colleagues at the college in which they would write something and meet every week to read it out. After the first chapter of a sci-fi novel that Wolfe was writing went down well, he decided to persist with it. The work that Wolfe read out at these weekly gatherings became “Faceless,” a novel Wolfe says portrays “The worst case scenario for social networks.”

Wolfe’s next book has the working title of “The Great China Quest.” It is about a trip across China made with colleague Adrian Winter in 2010 without flying and with 15 Scavenger Hunt challenges to complete. Here is a brief description from the website:

With only the starting and ending points decided, and a time limit of just 30 days (July 29 to August 27, 2010), The Great China Quest is the story of our journey to cover the 2,000 miles from Urumqi to Guangzhou (without flying) while attempting to tackle 15 scavenger-hunt challenges that our Chinese students have dared us to complete (see The Rules).

“That’ll be a really fun book,” Wolfe told The Nanfang. As well as the story itself which is compelling enough, it is full of side anecdotes about the two men’s combined 15 years in China. Some of the best China books about what life is actually like here are memoirs (think “Mr. China,” “River Town,” etc. rather than more scholarly works).

Aside from the books, Wolfe has also used his spare time in China to get into the habit of making music. He has published two albums of English songs and two albums of Chinese songs for free on his website. His Chinese songs have been played on local radio. The comments are overwhelmingly positive but with characteristic self-deprecation Wolfe told The Nanfang: “People tend not to complain when a product is free.”

A teacher at heart

In spite of all the time he spends on these activities, he describes them all as nothing more than just hobbies. “I really feel like a teacher at heart,” he said.

To Wolfe, his job at Peizheng College is an “excellent” gig for people who have a large number of side projects. He describes the college as being “special” and having a “very supportive faculty.”

He teaches English, music and Chinese at the college and writes intelligently about the process on his blog. As many other Laowais have learned, language-teaching and language-learning are highly conducive to each other.

Having said that, the hobbies are a huge part of what keeps him at Peizheng College, where he is staying indefinitely. “The ones who stay are the ones who find some meaning here.” Indeed.

In Praise of…Teaching English in China