The case attracted attention because Long’s death occurred immediately after he and two associates dropped into a well-known local restaurant for some cat hotpot on December 23.

Earlier that day, Long was with friend Huang Wen when the two men came across Huang Guang, the deputy director of a local Agriculture and Forestry Bureau office who wanted to sell off some prime forest land on one hill in his Bajia town. The three spent a few hours checking out the site, then went off for dinner.

Prior to this, SMD writes, Long had partnered with Huang Guang on a number of different occasions, seeking his help in purchasing wooded hill land, buttering up officials and to obtain planning permits and public funds for construction. Long, or his development firm, or both, seems to have paid Huang a total of 3.5 mln RMB for various services, but Huang Guang had reportedly recently become increasingly intent on settling other debts, even texting Long his bank account info, which later was used to establish Huang’s motive.

At the restaurant, after food had been ordered, Huang stepped out to take a phone call, at which time he seems to have snuck down to the kitchen. He tasted the cat meat, saying it needed to boil longer, then asked the owner of the restaurant to go fetch him three bottled beverages. Her husband then went out to buy cigarettes, which is when Huang is now suspected to have slipped in some gelsemium elegans, a species of a poisonous flower. When the food arrived, Huang kept eating along with Long and Huang Wen. 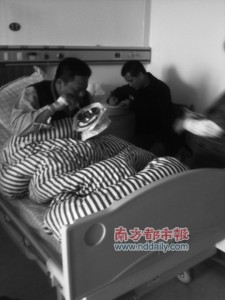 Long was taken to a nearby clinic, where he died soon after. The two Huangs were then taken to a hospital in the city where both survived, but Huang Guang himself was left unable to speak and drifting in and out of consciousness for several days.

In a December 28 interview with SMD, Huang said:

Long Liyuan and I have been friends for many years, and he has made a great contribution to Bajia’s economic development. Speaking both as a friend and as a civil servant within the Bajia town government, I can say that Long’s death leaves me in great sadness.

During the meal, Long’s friend, Huang Wen, is said to have mentioned that the cat meat tasted off, bitter, even joking that it might have been poisoned. The restaurant owner was called in and tried a piece, saying that too much seasoning might have been added. Apparently a very smooth operator, Huang Guang chipped in, adding that in his experience, in a dish which has been poisoned, ginger slices will darken. The ginger was still yellow, so they kept on eating.

According to China Daily, the restaurant owner was detained by police for “manufacturing and selling unsanitary food” and following Long’s death, his family offered a ransom of 100,000 RMB for any information relating to his death.

Guangdong first province in China with GDP exceeding US$1 trillion