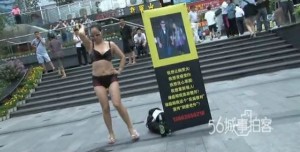 The woman dances in Luohu

Tension between foreigners and local Chinese has been rising of late.  First, there was a British guy caught on tape trying to molest a Chinese woman (then beaten), a foreign cellist berating a woman in Chinese, Beijing’s 100-day crackdown on illegal foreigners, and CCTV News host Yang Rui’s vitriolic rant against foreigners on his Weibo account.

Things haven’t been quite so heated down here (things get a bit more normal the further one gets from Beijing).  Still, a Shenzhen woman we told you about earlier, who called for Chinese women to avoid dating and marrying foreign men, has again drawn attention to herself.  This time, she appeared near Grand Theater Subway Station dancing while stripping to her underwear. The woman did the dance around 4 p.m. on May 5 near the entrance of Shenzhen Book City in Luohu District.

She had an mp3 player that played the dance song “Zui Xuan Minzufeng”. Next to her was a sign that had a picture of herself entwined with a foreign man, below which were the words, “I want my chest to be bigger, I want my skin to be paler, I want to be thinner.” The writing goes on to explain that she is looking for people to help her become a new person, and she wants to recover from her failed relationship with the foreigner.

Many passers-by gathered to watch her dance, but netizens have expressed contempt for the woman. A netizen named Peng Fei said he supported the foreigner’s decision to leave her. Another named Grey Autumn commented on how unattractive she was.

We’re not sure how stripping in public will help her cause, but we are starting to see why her foreign ex-husband may have left her.