In praise of… Da Shan

To most people, Benjamin Franklin’s remark that the only two certainties in life were death and taxes holds true today. But to any foreigner who has attempted to learn Chinese, there is a third certainty – the spectre of Da Shan. Being reminded that the Canadian comedian and television celebrity, whose real name is Mark Rowswell, is out there and speaks better Chinese than us is as much a fact of life for foreigners in China as squat toilets and “hello” catcalls. Da Shan smiling for the camera, image courtesy of Google

But it is easy to take for granted the difference that Da Shan’s unique career has made to China’s perception of foreigners. Since his emergence in the late 1980s, Da Shan has shattered the deeply held belief both within and without China that – as the missionary William Milne put it two centuries ago – learning Chinese is “a work for men with bodies of brass, lungs of steel, heads of oak, hands of springsteel, hearts of apostles, memories of angels, and lives of Methuselah.”

Da Shan became an instant celebrity in 1988 when his fluent Chinese delivery at the CCTV New Year’s Gala was broadcast to 550 million people. He has been a star ever since. Jesse Appell, comedian, former Fulbright scholar and founder of Laugh Beijing, explained to The Nanfang some of the significance of this: “People who grew up with the idea that at least one foreigner speaks Chinese were more open to the idea that others can learn as well, and that has allowed non-native speakers to engage with China in so many new ways.”

In our age of fleeting, pointless fame falling on the most unremarkable people, one does not remain a national celebrity for over 25 years without having something interesting to offer. Da Shan doesn’t just speak the language well, he is an accomplished comedian, a rare example of an artist who has flourished in a second language.

Appell, whose website has the assertion “When we laugh together, we learn about each other” shared his admiration for Da Shan as a comedian. “Humor generally functions the same here as it does in other places, with surprise, wit, funny logic, and self-deprecation creating humorous outcomes. Da Shan has been effective at doing those things in whatever role he plays, whether it is as a host, or as a judge on a show,” Appell said.

Musician publisher, and former Reuters journalist Graham Earnshaw agrees. “He plays a difficult role – foreigner in the maw of China’s state media – with skill and without sacrificing his integrity. I can think of no one else who has managed it,” Earnshaw told The Nanfang.

His comedy also can’t just be dismissed as imitation. Xiangsheng, the type of comedy that Da Shan is primarily known for, is not simply a form of stand-up comedy as we know it in the West. It has a group of skills and pieces that one must know in order to be a legitimate Xiangsheng performer, Jesse Appell explained. Like any Xiangsheng artist, Da Shan’s role was to adapt traditional pieces and give them his own flavour. So contrary to popular belief, Da Shan is no more of a “performing monkey” than most other entertainers on Chinese television.

One of the biggest criticisms of Da Shan is his fixed smile, which some less generous netizens have described as a “shit-eating grin.” This is symptomatic of the much-maligned lack of edginess to his act. But why should he be edgy? Being a successful populist is just as difficult as being a successful underground artist.

If he were a journalist, his failure to stick it to the powers that be might be an issue. But he’s not a journalist, he’s an entertainer. And anybody who is good at selling themselves knows that it’s difficult (maybe even impossible) to resist a smiling idiot.

The reason Louis C.K is (probably) the most acclaimed stand-up comedian in the English-speaking world today is because he shows that he understands the innate absurdity of his role. Unlike other giants such as George Carlin or Bill Hicks, Louis C.K doesn’t set himself up as the smartest guy in the room and this makes his act stronger.

Although Da Shan’s comedy is necessarily cut from a very different cloth, Da Shan shares this refreshing lack of self-seriousness. Despite once having been described by author Matt Schiavenza as “self-important”, this tweet shows that Da Shan has few delusions: 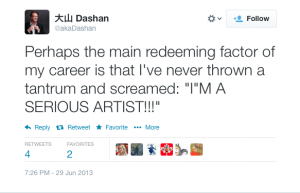 Despite not being the Laowai with the most interesting China story (that would probably be Sidney Rittenberg), or being history’s most impressive foreign Chinese learner (that would have to be Matteo Ricci), Da Shan has inarguably done more good than harm.

He has done immeasurably more for developing understanding between China and the great country of Guowai (foreign land) than pseudo-politically engaged celebrities like Sharon Stone and Bjork who have made the news with controversial remarks about China that were largely forgotten within a few weeks. As Da Shan himself argued on Quora, he works within accepted cultural norms, which he understood through living in and adapting to the country.

So next time you have a conversation in Chinese that is about topics other than your foreignness, remember that Da Shan played a small part in making this possible. Having said all this, if you ever catch yourself saying: “I suppose I do look a bit like Da Shan,” it probably is time to leave.