The laundry list of offences included, allowing businesses to pay for his travel expenses, as well as his daughter’s apartment. Liang disputed the charges, arguing he should have received a more lenient sentence due to his years of public service.

When Liang was party chief of Nanshan District, he reportedly took HKD 680,000 from an engineer at Nanyou Holdings Co., surnamed Ye, in exchange for appointing him head of the Nanshan Urban Construction and Development Co., a state-owned enterprise. Ye, also charged with corruption, pleaded guilty earlier this month to accepting RMB 2.09 million and HKD 290,000 in bribes.

Then there was Jiang Hanping, a deep-pocketed man who shelled out twice to Liang—once to become head of Shenzhen’s family planning commission, which cost him RMB 130,000, and later to ascend to the head of Shenzhen’s public health bureau, a promotion with a price tag of RMB 500,000.

Liang also used a man named Zhang to purchase the aforementioned apartment for his daughter, who was getting married at the time. Liang paid roughly 60% of the cost, and Zhang shelled out the rest. Zhang then agreed to decorate and furnish the apartment, paying an additional HKD 600,000.

Dongguan to give 1,000 yuan a month to parents who lost only-children

Dongguan announced yesterday that it will give 1,000 yuan a month in assistance to parents who lost an only child, gdchinanews reported. The families are given the name 失独 shidu (literally “lost only”). The “Dongguan Shidu Families Assistance Act” will come into effect on January 1 and will be in effect until at least December 31 2018.

The ancient expression 养子防老 （yangzifanglao） means “Raise a son to protect yourself in old age.” This expression encapsulates nicely a culture in which children are expected to support their parents in old age and may explain some of the thinking that has gone into the policy.

The man must be at least 49 and the woman must be at least 60 for a couple to qualify. Dongguan Mayor Yuan Baocheng said that the new measure, along with existing social security and health insurance policies, will provide a safety net for the ageing couples.

Guangzhou has introduced a new system of red and orange alerts that is aimed at helping the city solve its air pollution problem. A China Daily article has listed some of the new measures but is somewhat light on the details of how any of it is going to be enforced.

Under the new system, a red alert will be issued when the air quality index (AQI) is forecast to exceed 300 at more than half of the city’s 10 monitoring stations. Cars in the city will be allowed on the road only on alternate days during red alerts, according to the rules approved on Monday. Orange alerts will be issued when air quality index falls between 201 to 300. If an orange alert is issued, businesses that fail to meet emissions standards will be required to cease emissions altogether.

Thirty percent of government cars will remain parked if air pollution hits serious levels. Twenty percent will be kept off the road during orange alerts.

The mayor himself has pledged to change his commuting habits to help the environment.

Construction sites that put dust and fumes in the air, as well as fireworks and outdoor barbecues will be banned during orange alerts.

The government’s fleet of 13,000 cars accounts for about 0.6 percent of the cars in Guangzhou, Yang Liu, director of the city’s environmental protection bureau, said at a news conference on Monday.

“In difficult times, public servants should take the lead in taking action to address environmental pollution.”

Asked whether schools would be suspended during a red alert, Yang said education authorities would address that issue.

In the past three years, the city’s air quality has never deteriorated to a level that would today prompt a red alert, Yang said.

Guangzhou’s air quality complied with the standard on 210 of the 274 days in the first three quarters of this year, according to Yang’s bureau.

Of the six air pollution indexes, the PM2.5 reading failed the standard by the largest margin, averaging 47 micrograms per cubic meter and exceeding the standard by 34 percent in the three quarters.

Guangzhou’s PM2.5 readings will decrease by more than 6 percent in 2015 compared with the 2010 levels, according to the city’s environmental protection plan.

Although there is reason to be skeptical as to whether the measures will be successful, their introduction shows that the issue of air pollution has truly taken centre stage. Long-term China watcher Isabel Hilton had this to say:

There was a time, maybe ten years ago, when people were almost proud of smog because it meant ‘we’re industrializing, we’re becoming a real country, we have the problems of modernity rather than the problems of the middle ages.’ So this was regarded as progress….that moment has definitely passed, and these very serious episodes have brought terrific pressure on the government. If you are the only power, you also are the only people to blame, and they know that.

Guangzhou’s mayor and party secretary clean the streets… themselves 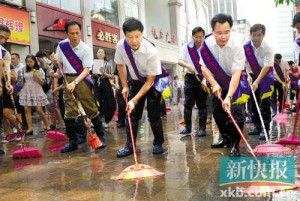 Whether it’s rubbish littering China’s bustling streets or some form of bodily fluid on the ground, Guangzhou’s top city officials have come together to capture the public’s imagination when it comes to keeping the sprawling city tidy.

In an attempt to encourage the city’s citizens to keep the city clean, Mayor Chen Jianhua (centre) and Municipal party secretary Wan Qingliang (right) grabbed a broom and a bit of elbow grease and headed down to Beijing Lu, one of Guangzhou’s main shopping districts, on Tuesday to give the pavement a good scrub.

While Guangzhou’s political leaders complain about the upkeep on the ground, at least the Flower City looks aesthetically pleasing.

Let’s see if this new policy stunt works out.