Mark Rowswell, better known as Dashan, once remarked that the statement “Westerners don’t understand China” is easier to take when you realize that Chinese people don’t understand China either. Sometimes however, a Westerner comes along who tries to make sense of the Middle Kingdom and wins recognition from his host country for his efforts in doing so.

Winston Sterzel, 33, a British-South African medical training manager who has been in Shenzhen for eight years, has been praised by plenty of Chinese netizens for the astuteness of his online videos which give an introduction to the “real China.” His motorcycle tours have taken him to dozens of cities and small towns, but the portal through which he understands the Middle Kingdom is Shenzhen, a city he fell in love with during a business trip and came to despite having no contacts here. 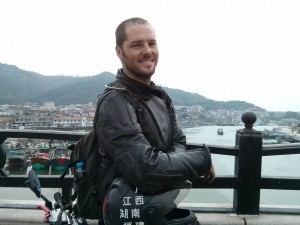 Sterzel has a large following on YouTube, Facebook, and Youku and has been featured in Shenzhen-based media eleven times. He has kindly taken the time to talk to The Nanfang about road trips, cold beer, internet celebrity and Chinese nationalism.

After moving to Shenzhen eight years ago, he immersed himself in the local Chinese community while learning the language. “Shenzhen is a migrant city, you meet people from every corner of China in Shenzhen, and as a result are exposed to the many dialects, customs and foods from all over China,” Sterzel told The Nanfang.

He works for a medical training company, training doctors in international hospital rules, etiquette, medical terminology and other things related to internships in Australia and Germany. Another one of his main activities is taking motorcycle trips around China. Either through business trips or lone adventures he has biked his way to Dalian, Inner Mongolia, Shanghai and many other far flung places. His videos about riding to Guilin gained 10,000 hits per episode, almost 80,000 in total.

Despite all this travelling, it is Buji that he calls home. “I tend to stay away from the mainstream expat hangouts and prefer to hang out in the urban villages at small local restaurants,” said Sterzel. “I am the only foreigner in the community,” he added.

He is fond of almost all of the things that make Shenzhen what it is. “Although I do occasionally enjoy visiting a posh restaurant in a posh area (Near the MixC or Coastal city etc) my work and daily travels take me trough all the different districts in Shenzhen,” Sterzel told The Nanfang.

Sterzel’s biggest claim to fame is his online videos that give outsiders an introduction to what he calls “the real China.” The series include “China, How It Is,” “Mandarin on Demand,” and “Village Crawls.”

As well as having over 26,000 subscribers on his YouTube page, his videos – which strive to inform other foreigners about China, have become an unexpected success with Chinese audiences.

A Chinese website picked up his videos, added subtitles and put them on Youku and Tudou. Shenzhen Daily reported in 2012 that his videos were popular both because Chinese appreciated seeing how outsiders see their country and to help teach themselves English:

“It is very interesting to see how foreigners think about China and us. He knows so much and is very objective. I particularly like one of his most popular episodes, ‘Are Chinese girls easy?’ It is so fun and so true,” one of the netizens, identified as “Nulixuexi,” said.

Here is part 1 of that episode:

His videos touching on more prosaic matters such as transportation, the cost of living and food have also proved a hit. “I like to show people what China is really like and dispel all the nonsense ideas that people have,” said Sterzel.

Sterzel’s best experiences in Shenzhen have come as a result of breaking through the foreign bubble and getting to know the locals. “I work side by side with motorcycle mechanics in my area and have pretty much been accepted as part of their family,” said Sterzel.

However, in both real life and in the comments sections of his videos there is one major negative that he has to deal with. “The absolutely ridiculous, irrational and overblown ultra nationalism that can rear its ugly head at any given moment can turn even the nicest of local people into the worst sort of lynch mob imaginable,” said Sterzel.

“As a foreigner it is always very important to avoid treading on anyone’s national pride,” he told The Nanfang. If you sift through the comments sections of his videos you will see the odd Chinese netizen take issue with some of his less rosy observations.

In spite of this, his insights into his adopted country have made him a recognisable figure in the local media establishment. Shenzhen television interviewed him just a few weeks ago. Some netizens have even said that watching his stuff is better than reading any travel guide, and there are plenty of Chinese netizens who would back up Sterzel’s claims.