Thousands pour onto streets in Shenzhen, Guangzhou to protest the Japanese

Thousands of people marched through the streets of Shenzhen, Guangzhou, and other cities in China today to protest the Japanese claims to the Diaoyu Islands, known as the Senkaku in Japanese.

The islands have become a flashpoint in Sino-Japanese relations of late, with a Hong Kong boat reaching the Japanese-administered islands last week and unfurling a Chinese flag.  Both countries insist the rocks, in an area rich in oil and gas, belong to them.

People in both Shenzhen and Guangzhou took to the streets today, along with their compatriots in Beijing, Hangzhou, Yiwu, Chengdu, Nanchang, Wenzhou, Taiyuan, Suzhou, and Changsha, to protest a Japanese landing at one of the uninhabited islands this morning.

Reports from Shenzhen and Guangzhou indicate thousands of people marched through the streets denouncing Japan, with some even smashing Japanese-made cars.  Photos of the protests are below.

RTHK has some details:

More than a hundred people gathered near the complex housing the Japanese consulate in Guangzhou, chanting “Japan get out of the Diaoyu Islands,” Xinhua news agency said.

In Shenzhen, protesters gathered at an outdoor plaza, waving Chinese flags and shouting slogans, Xinhua said, but did not give the number of participants.

Zhang Pei, one participant, said protesters were marching towards a train station on the border with Hong Kong.

“The demonstration is strung out for seven to eight kilometres. Many police are escorting us along the street,” he told AFP news agency.

Reuters reports on the landing made by the Japanese Sunday morning, which may have sparked the protest:

Early on Sunday, 10 members of a group of more than 100 Japanese nationalists who sailed to the island chain swam ashore to one of the islets and waved Japanese flags.

Three Japanese Coast Guard vessels were nearby, a Reuters TV journalist on board one of the boats said.

“I was hoping that someone with a real sense of Japanese spirit and courage would go and land and raise the flag, I just feel they’ve done a good job,” said Kazuko Uematsu, local lawmaker from Shizuoka Prefecture who was part of the flotilla.

The photos below are taken from Weibo.

(Thanks @MissXQ for the tips and photos). 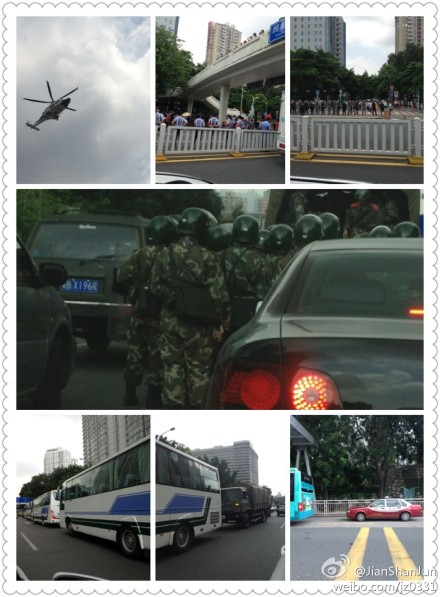 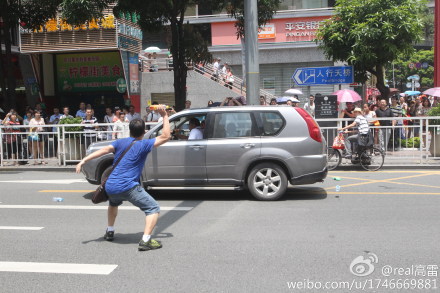