[This report contains images which may be disturbing to some readers.]

An arson suspect has been identified in the Hangzhou public bus fire that injured 32 people on July 5, reports CCTV News.

Hangzhou police have released video footage from the surveillance camera on the #7 public bus which shows the suspect setting the fire. The suspect is a male in his 30s with short hair, slightly overweight, and in a light colored T-shirt with a backpack. 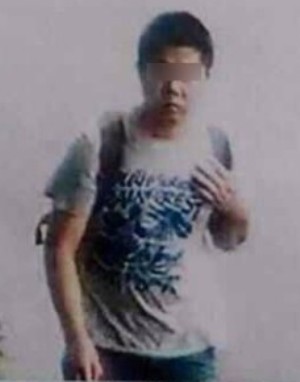 Caixin reported the suspect boarded the bus at 4:09pm and sat in the reserved priority seating in front of the rear doors. Nearly a full hour later at 5:03pm, the suspect poured a flammable liquid from his backpack onto the floor of the bus, and then ignited it with a lighter.

Eyewitnesses, such as Xiao Cheng from Jiangxi Province, confirmed that this is the guy who started the fire.

The suspect also apparently blocked the doorways, according to one witness:

The front and rear doors of the bus were opened. The fire was strongest at the back. There was a man inside the bus that tried to block the rear doors. He didn’t want to come out, but he kept crying and yelling and asking to be saved.

The suspect was rescued from the bus and is being treated at a local hospital, though his identity has not yet been confirmed. He received burns to 100% of his body and is listed in serious condition. From the video, the suspect can be seen sitting down amid the fire while other passengers tried to escape.

Six people are now reported to be in serious condition, up from five people reported on Saturday. The following surveillance video shows the suspect setting the fire at 0:57: