So much more than just sex: Dongguan tries to clean up reputation with new promo video 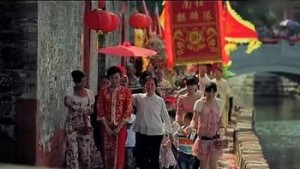 An example, from the film, of Dongguan’s traditional culture

Dongguan has been given some pretty unpleasent labels over the years. These include “Sex capital,” “Dickensian Factory City,” and “Sparta of the East,” according to today’s Southern Metropolis Daily.

But the city is finally fighting back, and the PR drive has started with a 1-minute promotional film called “Hello Dongguan” that praises the city’s traditional culture, natural scenery and basketball, among other things.

The film is screened at a railway station

Aside from its reputation for brutal working conditions in its factories, which was written about in Leslie Chang’s “Factory Girls,” Dongguan is known as something of a sin city due to the number of prostitutes and johns coming from other major cities, namely Hong Kong.

The latest scandal to befall the city involves a middle school teacher who was fired for dating a student ten years her junior.

The Nanfang’s translation of the narration, which is read by a woman who is very (how shall we put this?) photogenic, is as follows:

Upon coming to Dongguan, the first thing I notice is that the local people’s lives are deeply rooted in traditional culture.

The city has an inherent charm, warmth, and an amalgamation of cultures.

It has a relaxed atmosphere.

Everything about the city is distinct.

I have fallen in love with the place in a very short time.

Every day, the city manages to excite.

You can watch the video yourself below. Does it change your impression?