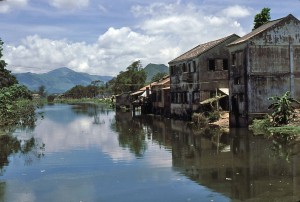 An American photographer has inspired nostalgia among Shenzheners after publishing photographs of the city that he took in 1980. Leroy W. Demery Jr, who was born in 1954, travelled through China between 1980 and 1983, and his first stop after entering the mainland from Hong Kong was Shenzhen, then a fishing village.

The photos were taken with a Canon TX SLR camera, using Kodachrome color slide film, ISO 64 or 25 which Demery bought in 1976 and still uses today. After being uploaded to Sina Weibo by a user named Xiao Chen, microbloggers remarked on the vast differences to the Shenzhen of today. User Dafeng Haishang remarked, “The last one seems to be of Luohu, but the others are all unrecognisable.”

User Hou Junmou added that the images bring him back to a time so distant it might have been a century ago. Another user named Cengjing de Xiaolu Hai Zai commented on how blue the sky was, how clean the water was, and how things have changed.

You can view a selection of Demery’s photos in the latest Nanfang Studio album.

Only in China: SWAT-Themed Wedding Photos
comments powered by Disqus