Li recently swung through Hunan University for a visit, and the press is in: the Chinese public love Li Keqiang. A lot. Students and faculty jammed the campus to get a glimpse of their beloved premier, while those lucky enough to be close to him shook his hand and posed for group pictures. As reported by CCTV, the crowd at the university was so packed that it took the premier ten minutes to walk 40 meters.

Whatever Li was there to announce was secondary; the important takeaway from all this is that the Chinese public love Li Keqiang.

The scale of adoration is so vast that it becomes progressively difficult to locate Li in some of these photos. See if you can locate Li in a “Where’s Waldo” with Chinese characteristics: 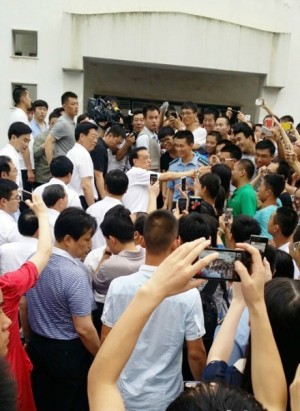 These photos don’t feature Li, but instead the crowds that lined the road hoping to catch a glimpse of their glorious leader:

Seemly adored even more than Grandpa Wen, the previous premier, we expect Li to make statements that will dwarf anything that Wen ever said.

And yet, as popular as premier Li Keqiang is, he still has nothing on Chinese president Xi Jinping who brought Chinese foreign students to tears during his trip to South Korea:

Here’s a video of Li being bestowed with the public’s adoration: