A man in Shaoguan’s Renhua County who used lethal injection to capture dogs which he would sell to restaurants is facing jail for using the same poisonous cocktail to kill a man who tried to stop him. Mr. Ye was charged Jan. 15 after murdering the man who caught him in the act of seizing a dog in Dongtang Town’s Tanglian Village on Jan. 2, Yangcheng Evening News reports.

Tanglian Village is a mountainous area in northern Renhua County with no more than 70 residents. In the past two years the local people’s simple lives have been turned upside down by dog thefts. “There have been over 20 dog thefts this winter alone,” the victim’s older brother Chen Rixin told the paper. 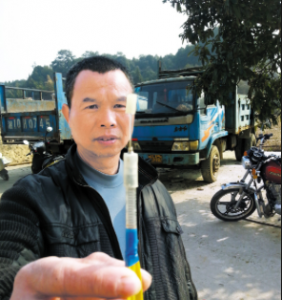 Chen Chuanlong who lives in the village says he saw two men in their 30s make off with a dead dog on a motorbike just after 6 a.m. on Jan. 2. Two hours later the men came back and he called his neighbour Chen Guangliang who went out to confront them.

Led by Chen Guangliang, a group of villagers surrounded the two men. Chen Guangliang ended up in a scuffle with one of them. According to Chen Chuanglong, the thief stabbed Chen Guangliang with a syringe. Twenty seconds later, Chen Guangling fell to the ground, complaining of dizziness. He was rushed to hospital but died on the way.

Villagers got together and caught the perpetrator Mr. Ye. An investigation has shown that he was running an illegal business in which he seized dogs and sold them to nearby restaurants. There is a growing cultural movement against the consumption of dog and cat meat in China but there is still plenty of push back, particularly from the northeast of the country.