A 10 year-old girl in Jiangsu Province is in hospital after the hair she had been chewing over a period of eight years formed a “rock” in her stomach, Shenzhen Satellite Television reports.

The hairball in Niu Niu’s stomach

Niu Niu has had the habit of chewing her hair while daydreaming since she was two years old, her mother told the TV station.

Her habit was at its worst when she was in grades 2 and 3 and learning to read, the mother, Mrs. Li, said.

Over the past year, Niu Niu has not had much of an appetite and has often vomited after eating.

Shi Duanhua, an expert in the digestive system at Jiangsu People’s Hospital, said the ball had a radius of 8-9 centimetres and that they were trying various methods to get it out.

Shi stressed that after Niu Niu is out of hospital, her parents should supervise her very closely. Hair, in case they are not aware of this, is indigestible. 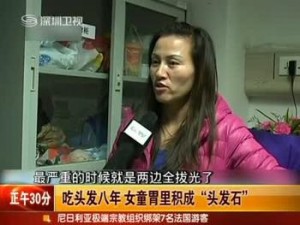 However, girls are thought to chew their hair most when they are around a boy they fancy, and her teenage years haven’t even started yet.